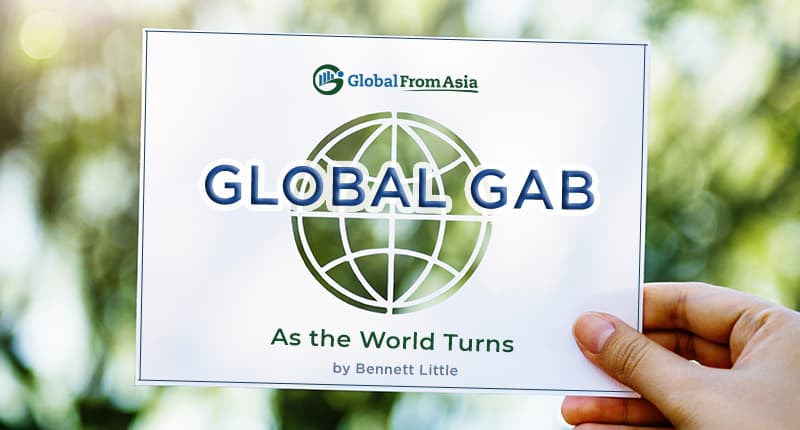 Well, it’s been a whole month since the last gabfest and, frankly, the whole news cycle seems to be SSED (Same Sh-t, Every Day …you can buy your own vowel). Every day, Donnie Doofus spews some more of his bloviating bushwah and every day China’s syncophantic bureaucracy spews more fatuous figures than the day before. And the world stumbles on it’s rheumy-eyed, covid-raddled, mentally addled way.

So let’s have some change of pace – for Hong Kong, I have penned a few words:

What will you declare as the emigrations really flow
Taking the cash, schooling and umbrellas yellow
What will you say when no one’s left then
Ah, maybe you can get a job in Shenzhen.

In the last month, Donnie Dumbass has been in rare form – rarely a day goes by that he doesn’t have some bon mot that is just unbelievable, at least until one recalls from whence it came.

On October 15th (yes, just a month ago, but it just feels so much longer) he went to California who was in the midst of its worst wildfire season since the days of the dinosaurs (no exaggeration, unfortunately) and had the unmitigated gall (when does he ever have less?) to declare that to blame the fires on climate change was to have more suspicion than science and that, “It’ll start getting cooler”.

Well, for once I have to agree with Donnie Doofus – as soon as he shuts his yammering yob, it will get cooler. Also, the air pollution will markedly diminish, just saying.

On the 17th, Bloomberg reported that China’s largest bank, Industrial & Commercial Bank, had to slash a new bond sale by 1/3rd due to lack of demand (ie. lack of confidence). On the 22nd, Reuters reported that China’s biggest property developers were all doing everything they could to get their books in some semblance of order by putting things “off the books” in various murky transactions. Remember, these are ALL presumably public companies. They also reported on the 24th that the much-touted post-pandemic recovery has severe regional imbalances ie. Beijing and Shanghai etc. are doing really nicely, and the poorer areas of China (eg: Hebei and Guizhou) are, like the migrant workers’ children, left behind.

According to the South China Morning Post (SCMP) on the same day, there is a pronounced worker shortage in rural areas to bring in the crops – normally I would take this at face value but, if so many migrant workers have returned home because of lack of work in the cities (as I reported in the past), then what happened to the bodies? And the answer is that the bodies are there alright but that the harvest (sic) isn’t – between drought and flood and armyworm, this has been a horrible year and they are already looking for something to lay the responsibility on.

Rolling at No Costs

Our friend, Specious Boris, is rolling right along with his “no cost” Brexit. On the 23rd of September, Bloomberg reported that J P Morgan was transferring L 200 billion out of London and 200 jobs (I guess that works out to L 1 billion/job 😊) – all to Frankfurt. And that doesn’t count the jobs that they are not transferring (such as support staff) nor does it count the multiplier effect – nor does it count the jobs and funds that they are not reporting. And that’s only one firm. Boris’ mouthpiece reported on the 25th that queues of 7000 trucks are “a reasonable worst case scenario” upon the introduction of Brexit..of course, it is ‘reasonable’ because he won’t be in it. For those who may have tuned Boris out (and who can blame them), he has:

Oh – and the kicker???? 10,000 trucks a day pass into the UK from the EU, so he is only projecting that they will be less than a day behind. Of course, he didn’t mention about the second day and those following. And he doesn’t have a deal yet with the EU and threatened that he will leave without one – nothing like bluffing when you are holding bubkes. This is the person who said that Brexit would not only NOT cost the UK anything, that they would make money by leaving. Well, it certainly won’t cost him anything personally and, last I heard, he is still getting paid. They ought to pay him twice as much to just go away – maybe he and Carrie could find a retreat!

On October 5th, Toyota and Nissan (who had previously demanded a meeting with the government) had it and demanded that the British Government cover any additional tariffs that may devolve should a Brexit deal not be agreed. … within a few days, many other companies issued formal notice of equal demands. Japanese companies usually operate very sotto voce – if they are taking this approach, they must feel very concerned (and they are 2 of the UK’s major employers). Oh Boris, you are such a fount of tsorris (Yiddish word meaning, “trouble”).

Don’t worry, it’s not all about HK, the USA, and the UK – South Africa, too, decided to show the world that they are not about to take a back seat when it comes to politics over science. On the 26th of September, the Health Minister, one Zweli Mkhize, decided that he didn’t like the comments uttered by some of the members of his official department’s scientific committee regarding his handling of the coronavirus, so he just disbanded it – altogether now, to the tune of Jingle Bells:

What the hell, what the hell
I’m the minister and I tell you what to say
You are not, you’re just a piece of bumaclot
(Jamaican word for toilet paper (NOT polite))
And you’ll bloody well do it my way

You say you won’t, you’ll say you don’t
But you’re leaving today
I’m the boss and giving you the toss
Like Amin said – the truth is what I say.

Play by the Rules?

The Donald is having a bad time of it – not only did he refuse to commit to a peaceful transition of power (Sept. 26th) but, on October 15th, he also refused to disavow the Q’Anon – he just wants to play with Xi, and Vlad, and Kimmy and they don‘t have to play by the rules so why should he, ri-i-i-ght?

Xinhua News (sic) on October 10th declared that the Golden Week Holiday experienced, “road use sustained at a high level but (that all was) stable and orderly” – well, let me give you a picture of how “stable and orderly”…the 100 km trip from Dongguan to Huizhou is all on wide well-groomed highway…..it took 12 hours – yes, 8+kph on the highway! Gotta love those Chinese news services.

On October 12th, the Government of China warned India and Indians to not have the effrontery to call Taiwan a country – oh, dear, they didn’t listen to Uncle Xi’s kindly advice and immediately proceeded to do so. On the same day, the C19 virus-free country of China announced that Qingdao was quarantining its 9 million people and testing them all – it blamed the several hundred cases unofficially reported on “foreign influences”…as of this writing, no further word on who/what those foreign influences were/are…maybe they can send that free vaccine from China Natural Biotec (which just happens to be a state-owned company) that they are ‘offering’ to all students going abroad to the people of Qingdao. Note that no high bureaucrat has been pictured taking that vaccine or any of the others touted as “safe and effective”.

Lastly, we started with HK so it is only fitting that we should end with HK – Carrie & Crew rammed through the new ways of doing things in HK, claiming that these are “right” and “in accordance with the motherland” – so the USA decided to insist that all goods Made in Hong Kong now be labeled as Made in China. The Carrie Crew are protesting vehemently….to date, they haven’t made any cogent argument as to why this should not be so, other than to repeatedly comment that, “this is not acceptable”, in numerous ways. Well they are finding out that you can’t espouse that they are part of China and then reasonably make complaints when they are labeled as such.