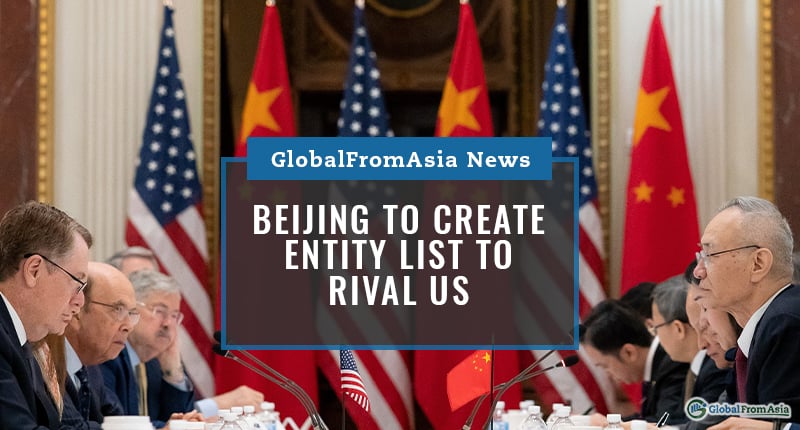 Beijing is preparing to create their own entity list of businesses that will rival the one that the United States (US) has already made.

The US Commerce Department just recently made a list. It was a list of more than 30 Chinese companies, firms, and institutions that were added to a blacklist.

All of those added in the list were accused of helping or spying for China. They were helping China spy on the Muslim Uighur minority group. Apart from that, others on the list were also tied to China’s military or their weapons of mass destruction.

Companies on the US’ list include Cloudminds, software group Qihoo 360, and lidar company Skyeye Laser Technology.

The companies and institutions added into this entity list will restrict them from doing business with other US companies. The only way around it is if the US government gives special authorization to do so.

The list was set to take effect on the 5th of June.

China did not take this action lightly. In response, they have said that they take “whatever measures are necessary” to protect the companies on the US’ entity list as well as their interests.

China immediately responded to the list, on the same day it took effect. The ministry released a statement saying that they firmly opposed the list. They also urged the US to stop these practices they consider wrong.

They added that what the US did has damaged the international economic and trade order set in place. It is also a serious threat to China’s place as the globe’s supply chain hub.

These sentiments were already spoken by China previously. It happened when the US blocked several shipments of semiconductors of Huawei Technologies way back in May. China also said then that they would take whatever measures necessary to safeguard the interests and rights of Chinese companies.

One of those actions was reportedly the building of an unreliable entity list. When the US heard about it, they used it as a tool to penalize other businesses and individuals. They did so by denying them access to certain goods created in the US, specifically in the technology sector.

Since then, China’s list has gone underground. No one had heard anything about it until last last month. China just sprung that they would use the list to impose certain restrictions on several US technology companies.