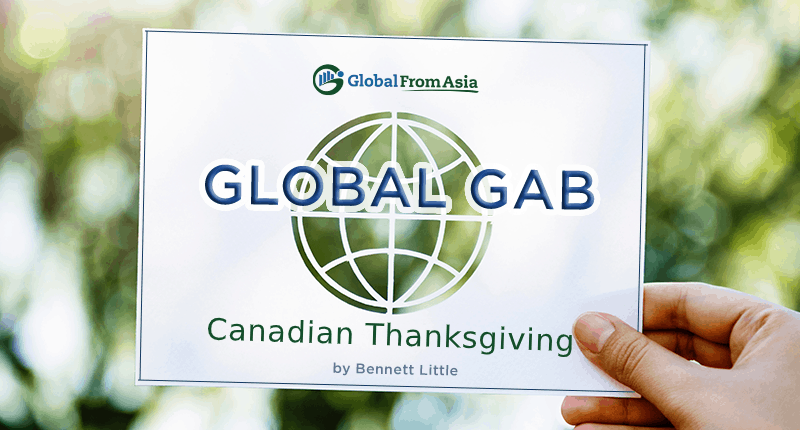 It is very hard to believe that we have already hit 30 editions/episodes/epistles– hopefully you believe that it has been quality as well as quantity ?

First and foremost, a shout-out of thanks to the reader (yes, there are some!) who brought to my attention that GG#29 gave the impression that I am in favour of the protestors’ directed violence. I re-read it again and saw how one could reach that totally unintended conclusion. So please let me be emphatically clear that I had no such intent and harbour no such thoughts. I think that it is as abhorrent for protestors to target perceived Chinese citizens and China-owned properties as it is for the police to molest and arrest people just because they are wearing black (not to mention the triad thugs doing the same).

Frankly, while the authorities can and do hide behind a somewhat specious argument (specious because they are often the ones instigating the violence) that they are the defenders of public order, the protestors fervently claim to be acting in the name of as yet undefined/ill defined peoples’ democratic rights. How can they not see that they are then effectively torpedoing their stance by their prurient actions? Defending (ie. acting defensively) one’s loved ones and property as a private citizen is certainly understandable – ‘defending’ (sic) by acting offensively and beating others up and trashing their property instead is unacceptable. One final word and I’ll be leaving this topic (for now) – you’ll notice that the shout-out has no name attached. It is a sad commentary that It is no longer safe to be associated with any side on any political topic on either side of the Hong Kong/Mainland China border. Phone conversations are being monitored, emails and bank accounts are being scrutinized and more, much more – so I have deliberately kept the name, even the sex, of the person out of it ….all I can say again is, “Thank you for bringing it to my attention, and be careful, and please stay safe”.

I have been doing a lot of reading of late and one of the things that struck me as very interesting is the article by Jeffrey D. Sachs that was dated yesterday and appeared in Project Syndicate. For those of you not aware, Mr. Sachs is a brilliant economist who finds data to support his fairly left of center view on any subject. Do you remember the adjective, “brilliant”? And just because he is left of center doesn’t mean that he is always wrong LOL. Anyway, you should read the article entitled, “Why Rich Cities Rebel”. He expounds on the recent instances of severe dissent in Hong Kong, Paris, and Santiago and the underlying causes thereof. I am going to just touch briefly on his points – for those of you so inclined to read it, it’s only 3 pages and will make great bathroom reading material….no s@!t LOL.

Seriously, “crisis in social mobility” coupled with “grievances over inequality” cemented with “a collapse in public trust in government”. Where Mr. Sachs went off the rails is by dismissing the Hong Kong extradition bill as “a seemingly modest policy action” – in Cantonese we would exclaim, “a-i-i-a-a-h”! He should have done his homework on the matter but that is another point – he isn’t the first and won’t be the last of people to declaim on another system while only having superficial knowledge at best and a paucity of empathy at worst, but his presentation included the fact that HK ranks 9th globally in per capita GDP but only 66th, “in terms of the public’s perception of personal freedom to choose a life course”. That is the number of the beast.

Can we blame the prostestors?

The lid blew off the pressure cooker and, instead of responding with attentiveness when some 25-30% of the entire population of Hong Kong protested in a march that had no violence and where the marchers actually cleaned up their trash before dispersing, the police started harassing and the authorities publicly ignored the issue. And they have been doing the same ever since. Ms. Lam and one Mr. Lo, The Chief of Police, today visited the main mosque on Kowloon Road in order to apologize for the police spraying it with blue dye “by accident”.

To my knowledge, they have yet to visit any of the protestors injured by triad thugs, including Jimmy Sham who was set upon earlier this week by 5 ‘unknown assailants’ wielding hammers – they have promised that ‘the assailants will be caught and punished’ but it is interesting to note that Hong Kong, one of the most CCTV intensive cities in the ‘free’ (?) world, has a police force who has yet to be able to apprehend a single suspect in the last 48 hours for that blatant crime (not to mention suspects in any of the other attacks on protesters). Can you blame the public for being concerned? Can you blame the protestors for being frustrated and angry? 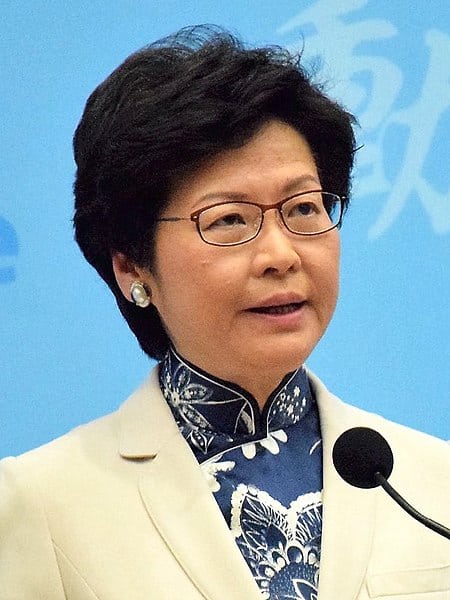 Furthermore, neither she nor the Chief of Police, again to my knowledge, have yet to visit the foreign journalist who, despite being clearly identifiable by signs of press, was deliberately (according to eye witnesses) fired upon by police with rubber bullets and will lose the sight of one eye. Neither of them have yet to visit the innocent bystanders (including a retired police officer) watching the mayhem who were set upon by police and beaten without any justification whatsoever. But they both found the time to visit the mosque because their wall was painted blue.

A poem for Lam

Well, I guess they had to start somewhere and better late than never, but again is it any wonder that the population is very upset and, while they may not agree with the methodology of the protestors, they aren’t shedding many tears about the mayhem either? It should be noted that, demands on Ms. Lam’s time notwithstanding, she has always managed to immediately find the time to eloquently defend at length the multiple ministers of her government who have been variously accused of different fiscal improprieties. Well, as long as she has her priorities straight.

Ah, Carrie, where were you when needed
You seemed to always be on the lam
When the populace with frustration bleated
You didn’t seem to give a tinker’s damn.
Under your watch you took a vibrant society
And managed to smash it in two or three
Bureaucrats should start offering more than crap
Lest Hong Kong become an overlooked dot on the map.

The figures came in about China’s GDP in the last 3 months – every analyst has it at 6%, which is the slowest in about 25 years. That said, a spokesperson for the National Development and Reform Commission named Yuan Da said on October 22nd/19 (as reported in The Global Times, a Chinese Government mouthpiece) that foreign reporting of any hard landing for the Chinese economy is, “groundless”, interestingly enough. I don’t have enough imagination to make this up but apparently other people do.

Also yesterday the China Daily (yet another Chinese Government media arm) reported that, “New Debt Instruments (are) Needed For Local Government in China” – if you go back a few issues in Global Gab, you will find that I addressed this from the other direction, reporting a total drying up of the internal bond market in China and that banks were refusing to lend to many other banks, even on an overnight basis.

Projects have been stopped or are stopping everywhere for lack of funding. So now it is suggested to have longer payback periods and have the Central Government guarantee some of it and the Provincial Governments guarantee other parts of some tranches. Who guarantees them has yet to be postulated. The same day, the Wall Street Journal reported that China ie. the Central Government Banking Authority in this case was cracking down on deposits in bank accounts for risky structured deposits but is doing so without addressing the structural problem behind same (something that I have been expounding upon continuously for the last several months).

More on this – on October 17th/19, Financial Times reported that Chinese banks were building up asset recovery teams as bad debts were rising (something that I mentioned months ago, too). And they also reported that the office market now has the highest vacancy rate in the last 10 years.

Further to that, it was reported that office buildings in Hong Kong are now so strapped for tenants that they are offering initial rents of HK$1/sq. m (ie. less than US 1 cent per square foot!). No hard landing coming – please define how hard is hard!

And, just to add to the ‘fun’ (sic), the New York Times reported on the same day that 2 Americans were detained since last month on unspecified charges. A lawyer named Dan Harris, whose firm is said to be a specialist regarding Chinese investment, said that, “you better know what the laws are and you had better follow them, because China is not going to let anyone slide, especially not an American or a Canadian”. This is also something that I alluded to previously. The lawyer also stated, “China has become a risky place”.

Some people will say that this is just tit for tat, that the US and Canada are doing the same to Chinese – there’s just a small rebuttal to that. In Canada and the USA, there are laws and there are lawyers and there are judges and the laws are followed and applied – in China, the laws are essentially what they say they are and implemented when and how they want to…it’s better than it was but it is nowhere near acceptability. Just ask the 2 Canadians still being held in deliberately dehumanizing conditions.

What’s up in Canada

This past week it was Canadian Thanksgiving. This week, there was a nationwide election – among the parties running was one whose fiscal proposals would totally bankrupt the country, another who wants to achieve separation of part from the country as whole, and another who thinks the whole thing is a joke; there was even a Communist Party fielding candidates.

Regardless, they were all allowed to make their voices heard and people came to the voting booths (open from 9:30 AM to 9:30 PM, with workers receiving mandatory time off to allow sufficient time to vote, and this not counting several days of advance voting) without harassment and without worry (save for maybe ‘worrying’ about who the winner might be ?). 66% of eligible people voted. The people’s voice was heard in peace and, for this, we should all give thanks. I know that I certainly do, as I give thanks every day for the sacrifices made by those to keep this country free. It ain’t perfect but it sure is a great place – let’s pray that Michael Spavor and Michael Kovrig are soon released to come home.

Let me know, please – at benlittle@facetedproducts.com