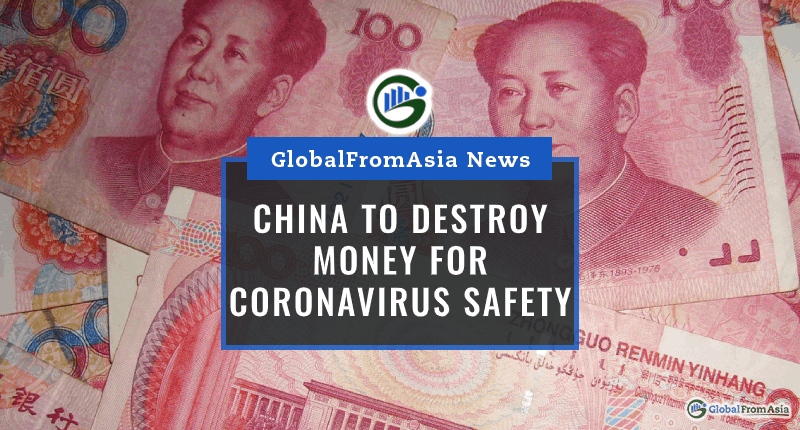 China will be destroying money as a precaution for the Coronavirus.

China’s central bank plans on collecting banknotes from around the country. Specifically, they are targeting money that has been near areas where the Coronavirus was. These include hospitals, markets, and public transportation.

They will be taking all the money and destroying. The central bank located in Guangzhou says that this is one way to keep people safe from the Coronavirus.

Similarly, officials from the People’s Bank of China (PBOC) ordered several institutions to do the same. They are targeting those who have been exposed to the Coronavirus.

The PBOC ordered these institutions to collect the money, set them aside, clean them, and then hand them over.

The central bank said that they will be using very hot temperatures of UV lights to clean up the cash. Afterwards, they will store the cash for two weeks before returning it to circulation.

The deputy governor of the central bank said that 600 billion yuan had recently been distributed. This started late last month, with 4 billion fresh banknotes circulating to Wuhan right before Lunar New Year.

In addition, almost 3 billion yuan was sent to Guangzhou in the south. At the same time, approximately 8 billion yuan has been withdrawn so far.

In the recent months, China’s banks have given close to 300 million yuan in cash. This money was given over more than a thousand transactions. The money was given to offices in the government, epidemic prevention centers, and other units at the frontline.

At the same time, 800 million yuan had been withdrawn from more than 6,000 transactions.

In last year’s fourth quarter, China’s economy has slowed by a total of six percent. Experts state that this slowing will continue until March.

The slowing is attributed to the massive number of workers who have been forced to stay home due to the Coronavirus. It is estimated that almost 50 million workers have not been working since January.

Due to this, the output and production of certain companies was put on a standstill. This includes companies from various sectors like restaurants, cinemas, and stores from many other industries.

With the central bank collecting and destroying money, time will tell what this effect will be on the already floundering economy.

Governments routinely collect and destroy old money. These include old coins and banknotes. In exchange, they set out new money for circulation. When this happens, the country’s economy is not affected. It actually helps maintain a healthy currency.

At the same time, this will help the current government maintain healthy lives by cutting off one more avenue for the Coronavirus to spread.

Apart from the destruction of the money, one large bank offered an alternative. He said that when customers deposit in banks, they would need to identify where the money came from. He added though that it may not be realistic to do so.