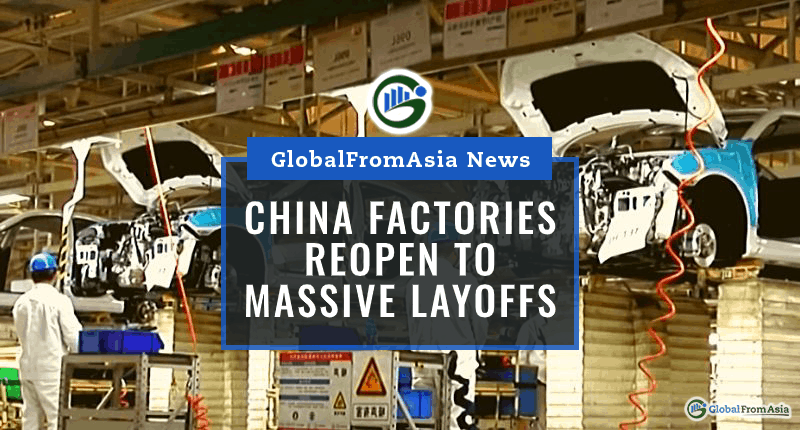 China factories have reopened only to layoff people due to the worldwide effects of the Coronavirus outbreak.

Through the Eyes of a Tailor

Recently, the number of local cases in China allegedly began to wane. Seeing it as an opportunity to improve their economy, the Chinese government greenlit the reopening of factories all over the country.

One reopened factory made thousands of blazers and suits prior to the lockdown. This factory exported their goods to countries like Switzerland, South Korea, and the United States to name a few.

The owner of the factory was optimistic about the continuation of operations. Buses were sent to pick up workers. People with cars volunteered to pick up other colleagues.

However, the optimism was destined to be short-lived.

When the Coronavirus’ numbers started to grow in China, their government shutdown exports, factory activity, and international travel. This was all done in an effort to stop the spread of the Coronavirus

Now though, the opposite is happening. International orders are being cancelled while other shipments are being delayed from all over the world. The fact is that the Coronavirus is affecting the economies of many countries.

Another problem that arose for the factory was that their supplier was also affected. Their fabrics came from Italy, but they also stopped operations. The factory owner stated that their fabric supply will last only until the end of April.

A senior analyst at Gavekal Dragonomics stated that this international economic impact will also affect China’s exports. He stated that the drop in the second quarter will probably range from 20 to 45%.

At the start of the outbreak, economists already foresaw the hit the Chinese economy would take. They also saw the potential rebound in store. They forecasted that their economy would have a similar “V” rebound as seen with the SARS outbreak.

Now though, economists are revising their reads. Their forecasts now mirror low levels that have not been seen since the Cultural Revolution that ended in 1976.

One area we can look at is China’s exports. Last year, it accounted for more than 11% of China’s growth.

One food supplier shared his experience with the outbreak. He said that previously, they were catering to various countries. However, their exports have already taken a large hit. Their last export was for April.

Even if they do have orders though, they are constantly worrying about the ever-changing restrictions of most countries.

If things don’t change, they may need to shut down all operations.

Unemployment is another key concern for China.

However, unemployment looms over all sectors. More layoffs are a concern for the government.

Last February, their unemployment rate was up to 6.2%. An analyst with the Economist Intelligence Unit (EIU) stated that the figure may increase by five more points this year. This boils down to 22 million in urban unemployment, with five million of those in the first two months of the year alone.