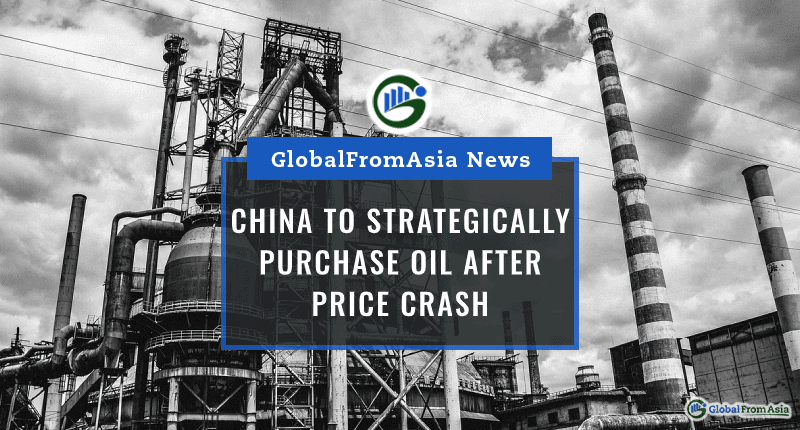 China is planning to strategically purchase oil for their federal reserves. This move was prompted by the oil’s massive price crash.

The Chinese government has a plan to fill up their federal reserves. The news was reported by people who have knowledge on the situation.

China is already the biggest importer of oil. Now, they are taking advantage of a more than 50% crash in oil prices. They seek to purchase more oil barrels for a much cheaper amount. The primary speculation is they will be filling their federal reserves.

Currently, the motivation to fill the federal reserves is just a guess by people close to the situation. At this point, the Chinese government has not explained the purpose for their purchasing.

The only thing reported is that China has told their government agencies to fill their tanks. They also have plans to use commercial storage units to bolster their reserves. Finally, they have told companies to buy oil as well.

According to the sources, they plan on purchasing oil that will last them for up to 90 days. If commercial reserves are included, it could double the duration up to 180 days.

Bloomberg has helped put 90 days’ worth of oil imports into perspective. Their research suggests that this roughly equates to 900 million oil barrels.

It is currently unknown how much is in China’s federal reserves. It is also worthy to note that China may not share Bloomberg’s way of counting oil reserves. However, analysts state that China could very well buy an additional 80 to 100 million barrels of oil.

On the onset, the additional purchase of oil barrels could inflate the supply of China’s oil. Taking the virus outbreak and price war between Russia and Saudi Arabia though, it could just equalize the oil that has already been used.

China’s plan of bolstering their emergency reserves echoes US President Donald Trump’s past plan. Last March, President Trump wanted to purchase roughly the same amount of barrels. His request was thwarted when the funds were not given to him.

Now, China has picked up on the plan.

There is a supposed plan for China to announce a fourth batch of reserves. This announcement would create more reserves for their country, while also acting as an economic stimulus. This stimulus would allow for construction opportunities to take place.

These construction opportunities were heavily affected by the coronavirus outbreak.

Two analyst companies have estimated the emergency reserves of China. One company estimated China to have 996 million barrels. Another estimates it at 928 million.

For comparison, the United States is said to have more than 600 million barrels in their Strategic Petroleum Reserve.

While oil prices are low, they recently increased this past week. This is seen by Brent Crude’s prices. Brent Crude is considered the international benchmark of oil prices. The price increased by as much as 14%, raising the prices to USD $27.88 a barrel.