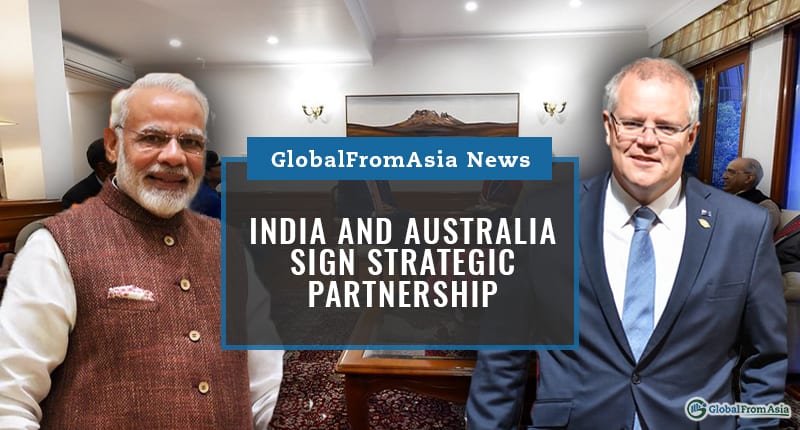 India and Australia have just come together and signed a strategic partnership. This took place as tensions between India and China continued to rise.

India and Australia already had a great partnership with one another. However, due to both country’s problems with China, the relationship was ripe to be taken to the next level.

Australia is having problems with China on the issue of where the Coronavirus originated. China has also imposed some tariffs on Australian products. Chief among these is barley.

India on the other hand got into a series of fights with China as the latter had begun encroaching on their lands along the Ladakh region in the west.

The evolution into the strategic partnership occurred during a virtual summit between leaders.

Due to the meeting, new agreements are now in place for cooperation on a number of industries. These industries include research, defense science, logistics, trade, education, infrastructure, and Indo-Pacific maritime issues.

Australia’s Prime Minister Scott Morrison stated that this new partnership will renew and improve the relationship between an already trusted nation.

Morrison stated that in the distressing times of the pandemic, it was best to deal with trusted countries. The relationship with India is a relationship that has stood the test of time. He stressed they both put a lot of stock on rules-based multilateral systems within the region.

Australia has strategic partnerships with several countries in the region. These countries include China, Singapore, and Indonesia.

For some years, a trade deal between Australia and India has been put on hold. The trade and investment flow never reached the right level. However, with the new partnership, Morrison hoped it would grow at a brisker pace.

India has now become the fifth largest export market and eighth largest trade partner of Australia. This is due to India’s coal and education exports.

An Attempt at Burying the Hatchet

The new partnership between India and Australia had the tensions with China as an intersecting point. However, India and China are now trying to bury the hatchet.

Generals from India and China are now holding meetings in an outpost in the Himalayan region. The goal of the talks is to end the standoff at the borders of both nations. Thousands of troops have been set to the border for both sides.

This is not the first set of talks that both nations have held. All past attempts have failed at ending the dispute.

One retired army commander from India described the on-going meetings as “unprecedented”. He says that he has never seen Corps Commander level officers hold such military talks.

As the talks move forward, the issue between the two countries is still tenuous and shrouded in ambiguity.

The upwards of 2,000 miles along the border is currently disputed and non-demarcated.

India says that the area included is at more than 2,000 miles. China on the other hand gives a figure of 1,250 miles.

Both countries have different proposals based on those given by Britain to China back in the 19th century.