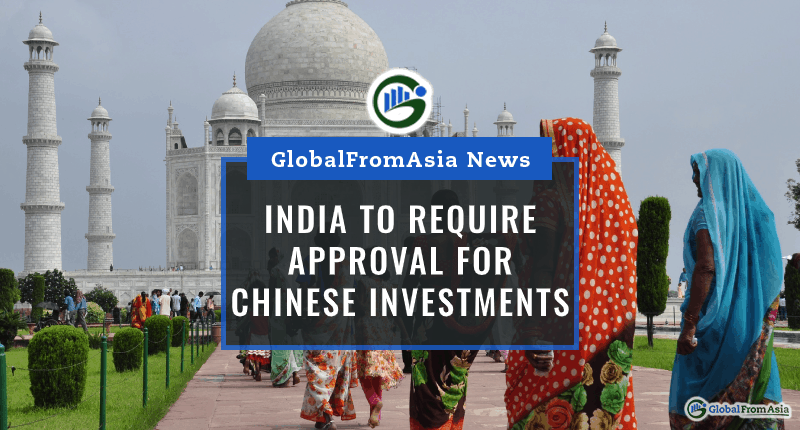 India will be requiring further approval for all future Chinese investments.

In the past two years, China has shown considerable interest in investing in India. These investments have reached almost USD $6 billion. However, the government of India is wary of these investments. They are specifically cautious of a hostile takeover.

In order to circumvent this, these investments will be put under tough scrutiny.

Prior to this week, India’s foreign direct investment policy was open and inviting. Just this Saturday though, it has been amended and tightened. The new policy requires all foreign nations at the border – not just China – to gain the approval of New Delhi for any new deals.

Before the amendment, only Pakistan and Bangladesh needed to gain New Delhi’s approval.

India’s Department of Promotion of Industry and Internal Trade was able to shed light on the change. They stated that this is being done to aid the Indian firms that are experiencing challenges amidst the Coronavirus. It is also meant to keep any opportunistic takeovers at bay.

Apart from deals, the new policy will also apply to transfers of companies. It says that any existing or future foreign direct investment in India must seek permission when being transferred.

This is a particularly interesting move by the Indian government. Before this, they had only interceded in deals with defense, space, and atomic energy. They have also cast a hard eye on foreign investments that may be in direct competition with local companies.

Analysts looking at this move say that it is currently aimed at China, Nepal, Afghanistan, Sri Lanka, and Bhutan. These countries have shown interest in gaining stakes in Indian businesses.

It may prove useful to see why India has taken these new moves.

First of all, it seems that the Indian government is following the steps of countries like Australia and Germany. Both of these companies have tightened their foreign direct investment policies or are looking at moves that may provide similar results.

Apart from that, China already has large stakes in a few Indian startups. Massive Chinese companies like Tencent and Alibaba already have a foot in India’s door. More than a dozen firms are also searching for potential deals in India.

A few examples of Chinese backed Indian companies include Paytm, Flipkart, Sharechat, and even Zomato.

In addition, India’s biggest bank – HDFC – said that the Bank of China raised its stake in the mortgage lender by 1%.

The recent moves come at a time when India has told startup companies to prepare for tough times. They said that raising new capital is to be a very challenging endeavor.

A recent survey from Tracxn has shown what startup companies are going through.