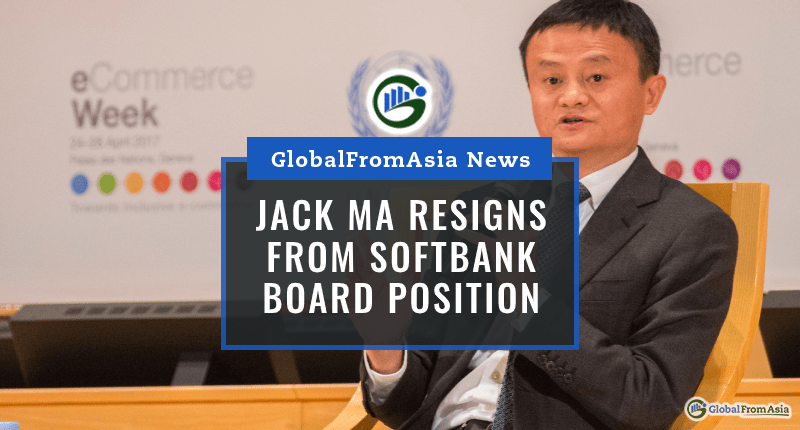 Jack Ma has decided to resign from the board of SoftBank.


SoftBank is a Japanese conglomerate based in Tokyo. It has stakes in a number of high profile companies around the world. These include companies like Alibaba, Slack Technologies, WeWork, Yahoo Japan, T-Mobile USA, and many more.

Apart from that, SoftBank also runs Vision Fund. It is the biggest technological venture capital fund in the world. It currently has a capital of USD $ 100 billion.

SoftBank and Ma have a long history together. SoftBank was one of the first companies to back Alibaba in a major way. Back in the year 2000, an amount of $20 million was invested. This was only a year after Alibaba was founded.

Currently, SoftBank owns more than 25% of Alibaba’s shares. This stake is currently valued $100 billion. This makes Alibaba the most valuable asset of SoftBank.

For 13 years, Ma has had a seat in SoftBank’s board. He also served as the director. However, that is all set to come to an end on the 25th of June. This date is also when SoftBank will have its annual shareholder meeting.

At present, no reason has been given to help explain Ma’s resignation. It may not come as a total surprise though. Just last September, Ma did something similar when he resigned as Alibaba’s chairman.

Similar to SoftBank, he is also stepping down from Alibaba’s board during their next general shareholder meeting. Ma said that he has been stepping back from business roles in order to focus on his philanthropy.


The announcement of Ma’s resignation came moments before they announced the report on their first quarter earnings. They had already painted a picture last month on the status of their company.

Last month, they said that Vision Fund will be losing upwards of $16 million. This was mainly due to the collapse of another one of their companies, WeWork. However, the bigger reason for it is the COVID-19 pandemic and its effect throughout the world.

The pandemic has also affected companies like Uber and Oyo. Both of these companies are under SoftBank.

Apart from the losses of their companies, it is expected that SoftBank will be announcing an operating loss of more than $12 billion.

The SoftBank Group is taking steps to lower their debt and get more cash reserves. In order to do this, they are planning to sell or monetize more than $41 billion worth of their assets. Afterwards, they will be buying back roughly $4.7 billion of its shares.

As for Ma’s leaving, they also have plans in place for that. SoftBank has already nominated several people to take Ma’s place.

First, there is Yoshimitsu Goto. He is SoftBank’s current chief financial officer. Then there is Lip-Bu Tan, the chief executive of Cadence Design Systems. Finally, is Yuko Kawamoto, a professor from Waseda Business School.