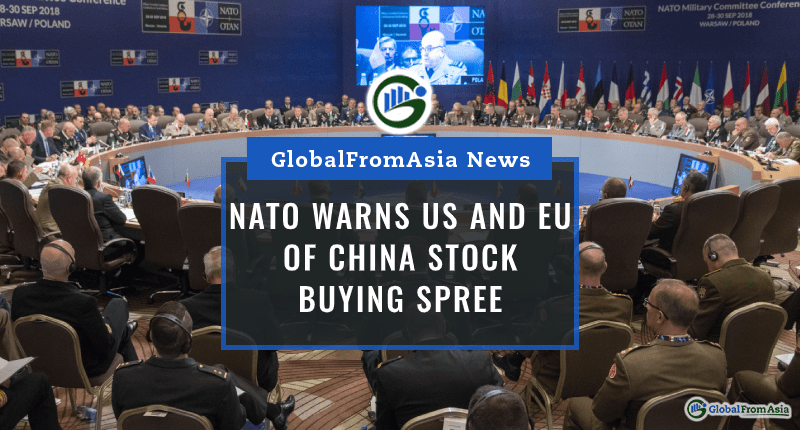 NATO has laid out a warning to the United States (US) and Europe of China’s stock buying spree.

NATO has warned US and Europe that China is coming fast and furious with loads of cash. China is coming in with a lot of cash and taking advantage of the falling asset prices due to the pandemic.

The NATO Secretary-General Jens Stoltenberg held a web conference to defense ministers recently. He stated that the pandemic has serious geopolitical effects. He adds that some allied countries are more vulnerable in this climate.

The vulnerability lay in the fact that critical infrastructure can be sold (or bought) out. While Stoltenberg mentioned no country names, there is a feeling that he is pointing to China.

In a report late last December, it indicated that China is investing in multiple seaports in Europe. They have been purchasing multiple ports in Greece.

The China Overseas Shipping Company (COSCO) has a large handle in Belgium. They currently own 90% of Belgium’s terminal operation. They also control over 50% stakes and managerial control port terminals in Spain. These are Bilbao and Valencia.

In addition, they already have minor stakes in Rotterdam, Las Palmas, and Antwerp.

A former MI6 chief told a news outlet that considerable effort needs to be put in the protection of Western technology from the hands of the Chinese.

Officials are currently concerned with China’s ability to buy influence all around the world. This is spawning a bigger issue: the growing distrust between China and big business partners.

Europe has already started to mount its defense against China. In an interview with Deutsche Welle’s online magazine, the director of the Europe Program at the Carnegie Endowment for International Peace said that China will not be granted easy access to critical infrastructures in Europe.

He added that now, more than ever, people need to look at China’s activities closely. Measures need to be put in place. As for the efficacy of these measures, they are taking a “wait and see” approach if China attempts to take advantage of the crisis in Europe.

The US has also begun to put protective measures in place. They have been in place for quite a while. For one, Chinese telecommunications companies are banned from operating in the US. The US has also had hot and cold bans on Huawei.

One area that China may have an interest in is the energy sector. The Chesapeake Energy company in Oklahoma City is on the verge of a collapse. China may see some interest there. However, it is unlikely that they get a major seat at the table.

The best case scenario for them may be a minority stakeholder sport.

The US though has already mounted defenses against China as a whole. It is currently difficult for China to invest in certain sectors in the US.