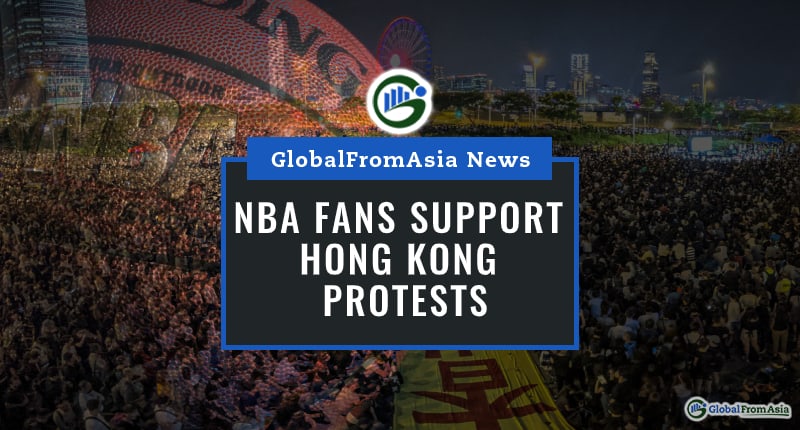 Fans of the National Basketball Association (NBA) show support for the Hong Kong protests in preseason games.
A group of fans attended a preseason game between the Toronto Raptors and the Brooklyn Nets. The game took place in New York.

Film producer Andrew Duncan procured 300 tickets. He provided those tickets to the activists where they showed their support by showing pro Hong Kong protest signs at the stands.

These signs had messages like, “Human Rights Matter. Here + There,” and “Don’t let China buy our silence.” Apart from that, these supporters also wore t-shirts that had similar messages. These shirts had “Stand with Hong Kong” printed on it.

In a mighty jab against China, there were a couple of fan activists who were spotted wearing Winnie the Pooh costumes. This costume is now a symbol for mocking Chinese President Xi Jinping. It is currently banned in China.

One spectator and supporter was interviewed at the game. He said that what they were doing is performance art, and that they want their performance to show their support for Hong Kong. He continues by saying that China wants to quell freedom of speech, and it is now spreading to America.

The China Effect in the NBA

Two weeks ago, Daryl Morey – General Manager of the Houston Rockets – tweeted out a message that supported the Hong Kong protests. The tweet said, “Fight for freedom. Stand with Hong Kong.” At the time, he did not know how big the repercussions of the tweet would have.

Apart from pulling the games from TV, streaming rights have also been dropped. While it may sound a miniscule occurrence, it is actually a big thing. This is primarily because the NBA is the most famous sports league watched in China right now.

Many other parties have pulled their support for the NBA.

Tencent Holdings is signed to a five-year deal with the NBA. It is valued at half a million dollars. They have dropped streaming right.
Sporting sponsor Li-Ning has pulled support with the Rockets.

Houston Rockets merchandise that was being sold on Alibaba was pulled.

These are only a few repercussions.

Ripples from the Pond

There are a few more ripples that this had made in the NBA.

While Silver did defend Morley’s right, people can visibly see how the NBA is distancing itself from any anti-China sentiments. Journalists are not allowed to ask any questions regarding China or Hong Kong protests. In some cases where it took place in press conferences, the microphone was promptly taken away and the question was ignored.

The biggest ripple though came from NBA superstar Lebron James. James’ recently released sentiments stating that Morley should be chastised. He criticized that those comments may possibly affect the revenue that each player could make.

He also expressed that he did not really have a comment regarding the Hong Kong protests that have been raging on for months. He stated that not every problem should be handled by everyone.

These protests continue on in several more games in the NBA. NBA continues to distance themselves from these kinds of comments.

However, the US lawmakers have criticized the NBA for their evident kowtowing to China.