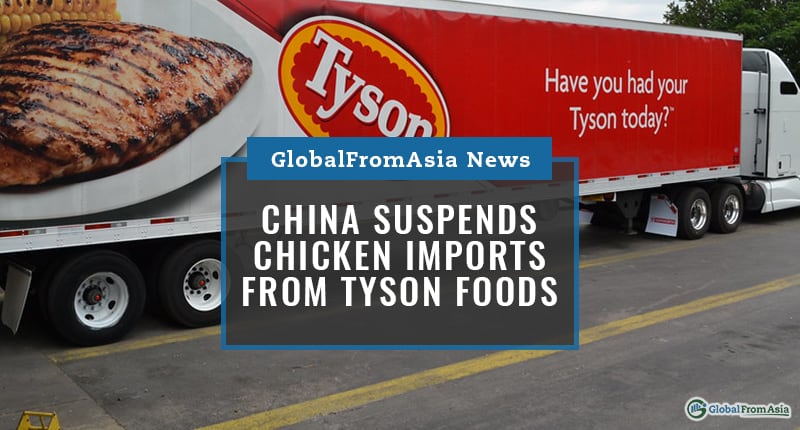 China has just suspended chicken imports from United States (US) company Tyson Foods. This happened after their facility in Arkansas tested positive for the Coronavirus.

China stated that they suspended the import of Chicken from Tyson Foods due to hundreds of Coronavirus cases. These cases were found in a plant in Arkansas.

The Chinese government noted in a news release last Sunday that employees from the company were exhibiting a “new pneumonia with aggregation infection.”

Tyson Foods investigated the matter and did indeed confirm the reports. They confirmed that the facility was the one located in Springdale, Arkansas.

Gary Mickelson, the spokesman for Tyson Foods, wrote a letter to the Associated Press about these matters. In it, he stated that the safety and health of their employees is their number one priority.

As such, they are working closely with the Department of Agriculture’s Food Safety and Inspection Service in making sure they comply with all the safety requirements laid out by the government.

Mickelson also wrote though that all health organizations – including those in the US – agree that there is no evidence of Coronavirus transfer via food.

Last Friday, the company had tested their employees in facilities across several states. These include Arkansas, Benton, and Washington counties. They stated that those who test positive showed no symptoms when they were tested at the time.

They had tested a little less than 4,000 employees. Of those tested, more than 400 or 13% tested positive for the Coronavirus. About 95% of them were asymptomatic.

This is not the first time that Tyson Foods has had cases of the Coronavirus. Their facilities in North Carolina, Nebraska, and Iowa have had similar cases.

This is not the first time that the Chinese government has banned the import of a meat supply. A few days prior to the Tyson Foods incident, China had banned imported pork from a Germany meat plant due to more than 650 reported outbreak cases.

Along with the Tyson Foods ban, this has really called into question the certainty of fresh food shipments into Beijing. It also adds to the concerns of importing safe proteins into China.

China has a population of over 1.4 billion people. With the bans of chicken from the US, pork from Germany, and Salmon from Europe, there is a growing concern about the food and protein supplies of the country.

While salmon is very unlikely to carry the Coronavirus, the shipments were still frozen and the importing was banned. This was because they found the virus on chopping boards that were used for the salmon at Xinfadi market.

China is in the middle of another lockdown after they found traces of the new Coronavirus in a certain market. The lockdown is just partial as authorities investigating the origins of the virus.

The Ministry of Commerce said that they would step up their communications and coordinations with other countries. They hope that this will ensure the safety of the imported foods.