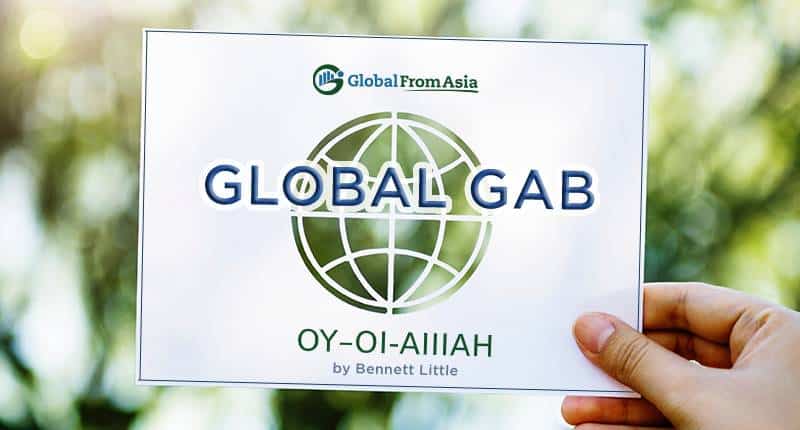 NOTICE TO READER – I started writing this column 10 days ago and stopped as the news was just too bleak and I was hoping that something lighter would come along. As we all know, nothing has, culminating today in a 33% drop in oil and a crash of the stock markets worldwide. So I am just getting this off my desk and onto yours. My apologies, but I don’t make the news; I just report/comment.

In Turkey, Mr. Erdogan is the de facto Head of the Central Bank in addition to all the other fezzes he sports – he just finished another effort to prop up the lira, which is akin to running out of fingers and toes to keep the dyke from leaking; the country is now left with (BBG, Feb. 26th) just 20% of the foreign reserves needed to repatriate its foreign obligations due over just the next 12 months. As they say, the hits just keep on coming. Well, if they come to Erdogan’s palace to collect, he has any one of a 1000 rooms to hide in (no word on how many tunnels and back doors). OY, right?

Mr. Johnson of the UK, not intending to be outdone in brashness by either Mr. Erdogan or The Donald, has insisted on “equivalence” (BBG – February 11th) for its financial firms and their dealings with those of the EU. For a change, all the member states of the EU are agreed and the outgoing Prime Minister of (Northern) Ireland put it most directly and pithily – “There will be no backsliding on what has already been agreed.”

Boris, far from being chastened, retorted that, if they don’t have a deal on his terms within 4 months, then he will break off negotiations – someone ought to tell this guy to start smelling the old fish and chips wrappers. I read today that a significant number of people in the UK feel that an AI could do a better job of negotiating Brexit. OI, right?

But let’s take Singapore as an example – when this coronavirus manifestation first started, The Prime Minister, Mr. Lee Hsien Loong, immediately gave a press conference and stated unequivocally that, “Fear can do more harm than the virus itself”. Since then, there have been numerous updates by the government to its citizens and the corresponding response has been reasonable concern without any manifestation of undue panic. It shows that it can be done.

Contrast that with the mishandling by Carrie Lam and her associates in Hong Kong – the populace, bombarded with bureaucratic ineptitude in information distribution, pronouncements, and decrees, and all the ultimate retrenching that those necessarily precipitated, have total mistrust – this from an 80%+ approval rating less than 2 years ago. So when the government stated that there was no shortage of masks, hand sanitizer, and toilet paper, the immediate response of the public was to go out and buy all that they could find, with the net result that the shortages (which may or may not have been real at the outset) became a self-fulfilling prophecy, leaving even more distrust sown (if possible). A-I-I-A-A-H!

In HK many an apolitical fellow
Recently changed from being politically mellow
With the economy in a jam
And leadership evidently on the lam
The only choice was to be mustered(!) as yellow!

Frankly, while there is plenty to slam China about:

Misleading figures on the coronavirus
Misleading figures on the economy
Misleading figures on ____________FILL IN THE BLANK__________
it’s just not as bad by comparison to some of their other ‘efforts’ (sic), like commandeering hospitals and throwing even terminally ill patients into the street (BBG – Feb. 13) or expelling 3 Wall Street Journal reporters from China for having the temerity to call China, “The Sick Man of Asia”, and then China doubled down by demanding that the publication apologize. A-i-i-i-a-a-h. A trending thought on Weibo these days is what is taking that supposedly crack investigative team so long to research Dr, Li Wenliang’s death in Wuhan. I guess it isn’t easy finding facts to fit the conclusion. The people are singing and the song will be heard!

The coronavirus is sweeping the planet – to date, no one has much to offer in the way of hard facts. No one knows the incubation period and the closest we can get to intel is, “5 days to 4 weeks”…..that’s a helluva spread if you are a gambler but not much use if you’re anyone else. As late as yesterday, March 8th/20, the ‘word’ was don’t go closer than 1 metre to people. Now they have said that people 4.5 metres away on a bus can be infected. Going to need to get some new shirts because that’s going to be a looong stretch. OY.

On a surreal note, I am still getting numerous email to come try restaurants in Hong Kong – they are cancelling Grand Prix races, tennis tournaments, soccer matches, conferences, meetings etc., but mo’omentai (never mind), let’s do lunch. A-i-i-a-a-h heya! I hear that the Titanic has some empty seats at the bar.

And, not to be outdone by a China who, among its foibles, reclassified 3 times what actually constitutes a person infected with the coronavirus, we have Mr. President, that gift to hairstylists and editorial cartoonists everywhere, Donald Trump, who stated again today that the risk of the virus hitting the USA was low – as preposterous as this comment is, it pales when compared to his comment on February 29th/20, when he referred to the coronavirus being present in the USA as “fake news”.

His pledge that there would be 1 million testing kits for the virus available by March 6th/20 fell short by about 925,000, or 92.5%. Considering that most of The Donald’s promises are as spurious as a degree from Trump University, truth of 7.5% makes it one of his better-kept pledges, which is YUGELY sad any way that one looks at it. Don’t worry children – you, too, can grow up one day to be president and lie, pander, and line your pockets just like Donald! Since taking office, The Donald has spent over 20% of his time at a Trump resort – this guy knows what’s important.

Not to be outdone in crassness, Kyle Bass on February 10th/20 suggested that the virus should be allowed to spread in China so that it would infect officials – like what, the bacteria can be commanded to be selective? No. I won’t comment on the human aspect as I am not sure that anyone who could suggest something like that is human. Oh, wait – what do we have behind Door #3? Why, it’s Rush Limbaugh who stated on February 24th that this virus was initiated as an attempt to prevent The Donald from winning his 2nd term in office. And, dear readers, there you have it – absolute bottom zero. Now that’s a MAGA moment!

But, not to be outdone, Xinhua declared on February 14th, that this, “epidemic will eventually come to an end, just like the winter fades away”. This was followed a few days later by an interview Bloomberg News had with some cured patients, one of whom maintained that, “the disease wasn’t scary and you’ll be cured as long as you believe in your country”. A-i-i-a-a-h!!!

For comments or suggestions – please write me benlittle@facetedproducts.com