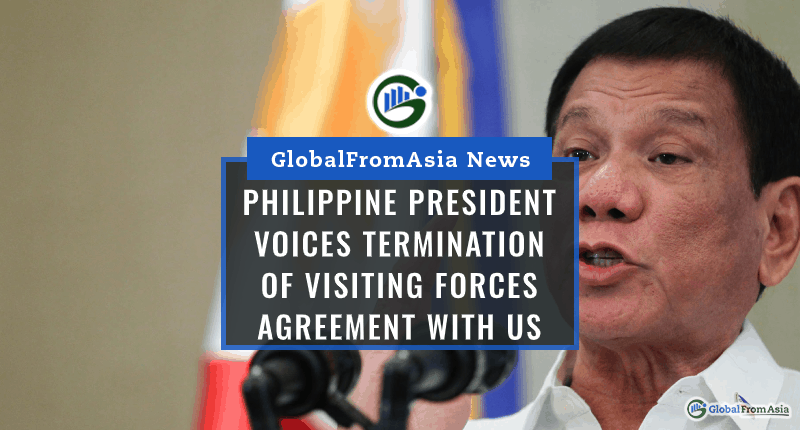 Philippine President Rodrigo Duterte has just voiced his plan of terminating the visiting forces agreement (VFA) with the United States (US).

This happened last month. The US government cancelled the visa of current Senator Ronald Dela Rosa. Dela Rosa was a police chief until he was elected into office.

As police chief, he was in charge of President Duterte’s drug war. This saw deaths pile up due to drug usage and selling.

Dela Rosa received the news about his cancelled visa last month. Until now, Dela Rosa is still unclear as to why the cancellation happened. However, he suspects that it is due to the many extrajudicial killings under his watch from 2016 to 2018.

The news of the termination notice was actually delivered by the President’s spokesperson, Salvador Panelo. He added that President Duterte is scheduled to have a conversation with US President Donald Trump.

The meeting may happen at “any time”, but the agenda for the discussion was not clarified.

The VFA allowed troops from the US to enter into the Philippines temporarily. Once in the Philippines, they would be participating in joint training exercises with Philippine forces.

Part of the VFA agreement was its termination. Either party can voluntarily end the VFA via a written notice. Once it has been sent, the VFA would end in three months’ time.

Currently, another defense pact is already in play. This pact was made in 2014 by the allied countries. This pact allowed the US to extend their stay in the countries and strengthen their presence there. They did this by storing defense equipment, maintaining barracks, and building warehouses.

If the VFA were to end, more than 300 activities and joint training sessions will stop. According to Philippine Senator Teodoro Locsin Jr., these activities help local law enforcement and the Philippine military. They use these new skills to better themselves from new threats.

Back in 2017, ISIS forces had taken over the island of Marawi. With the help of the US forces, the Philippine military was able to lay siege to the island and liberate it. Locsin said it wouldn’t have been possible without the additional help.

Some examples of these include cyber attacks, human trafficiking, drugs, and terrorism.

Senator Locsin also stated that the US has offered more than just exercises to the Philippines.

For the past three years, the US has provided the Philippines with security assistance. Recently, the US had given more than US $550 million. Senator Locsin foresees that tearing down the VFA may affect the Philippine economy as well.