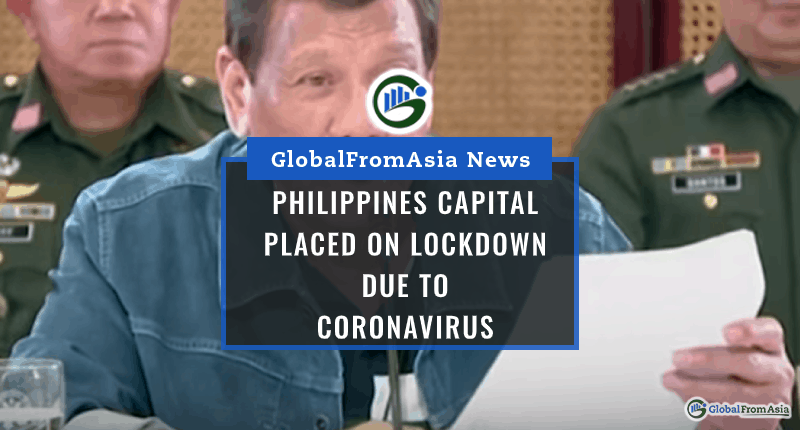 The capital of the Philippines – Metro Manila – has just been put on lockdown due to the rapid increase of Coronavirus cases.

President Rodrigo Duterte gathered media for a press conference today. In the press conference, he announced that Metro Manila will be put on lockdown. He did so after raising the alert level of the Coronavirus to Code Red Sublevel 2.

This lockdown will run for the whole of one month or 30 days. It is slated to begin on the 15th of March and end on the 14th of April.

This is the biggest lockdown that the country has had in the recent past.

The main objective of this lockdown is to quell the rapid spreading of the Coronavirus. In the past two weeks, the number of Coronavirus cases in the Philippines has ballooned exponentially. As of March 12, there are 52 recorded cases.

Within the capital of Metro Manila, the lockdown includes more than 15 cities and one municipality. This was put together by the Inter-Agency Task Force (IATF) composed of various cabinet members of President Duterte.

The biggest point that the lockdown guidelines will be imposing is the travel restrictions to and from Manila. Within the upcoming 30 days, land, sea, and air travel will be prohibited from entering and leaving Manila.

Despite having a clear direction in the guidelines, officials have not fleshed out the new directives that the citizens will need to follow. Road transport officials will be meeting tomorrow, March 13, to talk about and plan out the guidelines.

Currently, the guidelines President Duterte read to the Philippine public was just a resolution. However, he made clear his intent that he would be turning it into an executive order to make it enforceable.

Other points within the lockdown guidelines include a “community quarantine”. Despite having mentioned it in the press conference, President Duterte did not explicitly explain how this would take place.

President Duterte was able to shed light on various other quarantine types.

Another measure is the continued suspension of classes and government work. Classes were initially suspended just throughout this week. However, with the alarming growth of case numbers, President Duterte has extended the suspension to a month as well.

Apart from these, the Health Secretary said earlier in the day that Filipinos will be able to test for the Coronavirus for free. A state health insurer will be shouldering the cost.

The Philippines has followed in the quarantining footsteps of several countries. First and most obvious is China. The Chinese government locked down their province of Wuhan where the Coronavirus started.

Italy and India have also closed down their proverbial doors. This is all in an effort to stop the spread of the virus.