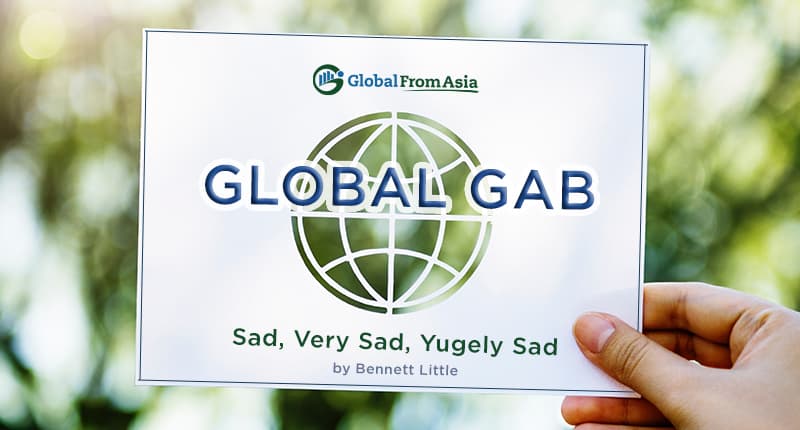 Well, it’s been 3 days since my last rant and, judging by the amount of immediately favourable responses, maybe I should give up on reporting the news and stick to rants and raves LOL

All joking aside, though, there is a lot of news out there and it is often difficult for the well-intentioned person to find it amongst the ever-increasing proliferation of (ahem) fake news. So I am going to try my best to keep it to a schedule of once a month and keep sifting through all this depressing stuff in order to give you the nuggets.

Notwithstanding the evidence available for anyone to see if they just keep their eyes open, the Chinese press is evidently not to be outdone in their stated (sorry for the pun) mission of, “China great, all others bad (or worse)”. On June 1st/20, The Wall Street Journal, who was recently kicked out of China for the ‘crime’ of telling inconvenient truths, reported that Chinese factories were open but were having troubles associated with falling overseas orders – Reuters (June 6/20) reported that exports were down 3.3% and imports down 16.7% – yet, on that very same day, Xinhua reported exports as UP 1.4% and imports down 12.7%. Fast forward to today (June 29), Xinhua reported that manufacturing profits for the month of May were UP 6%….and I thought hallucogenic drugs were illegal in China. Man, when they go to Burger King, their reporters must be hooked on Whoppers. Sad.

Also on June 1st, Bloomberg reported that many people are thinking of leaving Hong Kong due to the implementation of the coming new Security Law. In fact, a poll in HK showed that 37% of people were actively thinking of leaving. On June 6th, Reuters reported that HK residents were “rushing for offshore bank accounts” and Bloomberg reported on June 13/14 that many in HK are reducing local exposure in assets and/or keeping their assets liquid and available.

Like I said previously, the only reason that the flight of capital has not been easy to see is because the Beijing Government has been transferring assets into HK at the same time. If you think that all those so recent IPO’s on the Hang Seng from mainland Chinese firms are coincidental, please think again.

More than that, South China Morning Post reported on June 18th that HK has had the highest number of personal bankruptcies since 2003. A poll showed that a full 37% of Hong Kong adults were actively thinking about leaving – the main spokesman for Beijing in Hong Kong, when asked about this, replied with an old Chinese phrase that essentially means when translated, “Who cares – let them go.” To profess to not only not care but to casually dismiss the fact (he did not challenge the figure) that a huge chunk of your best, brightest, most educated, and well-off citizens intend to leave is, to me at least, indicative that the Beijing Government intends to push its plans through regardless of the cost in financial or human terms. Very sad.

Frankly, the June news for China was almost uniformly disconcerting – adding to the news above, The Wall Street Journal reported on June 6th that anecdotal evidence suggested that the labour market in China was in worse shape than “official” government data would suggest (eg: tens of millions of migrant labourers compelled to return back to their homes and have been ignored in all “official” counts) and, on June 10th, reported that, “the plight of low income workers is highlighting the gaps in the social safety net”. Li Keqiang himself stated that 40% of Chinese citizens, that’s 600 million people, have incomes of less than RMB 1000/month (US$141).

The Nikkei Asian Review reported on June 13/14 that companies had to ease their welfare payments and that the government had to assume responsibility for same (due to the economic pressures of the C19 virus) and that the Chinese social security expenditures will exceed revenues for the first time since records started being kept over 20 years ago. On June 4th, it was reported by the Nikkei Asia Review (among others) that Xi Jinping’s on-again off-again visit to Japan is now off, make that, “off indefinitely”. That’s a huge loss of face. So sad.

Notwithstanding that China has been piling on the pressure anywhere and everywhere to have Huawei be a major 5G supplier worldwide, to the point that Bloomberg reported on June 8th that HSBC told Boris Johnson’s top advisers that the UK could expect reprisals of it isn’t chosen (such as China pulling out of deals for UK power plants and the projected high speed rail system), the UK did just that, refusing to be held hostage.

And there were other minor embarrassments – Google reported on June 5th that Chinese hackers had targeted Biden’s campaign; it subsequently came out that China would rather have The Donald win as they feel that he will continue to alienate traditional US allies, whereas Biden is a team player.

News also surfaced publicly that China is influencing Chinese communities in the diaspora through the United Work Front Division of the CCP. And the economic news got worse and worse – on June 9th, Moody’s cut the rating of the largest private telecom in China and ruled that a delayed bond repayment was a default.

On June 15th, China lost a WTO case wherein it had tried for the last several years to be declared, “a market economy” – why this wasn’t publicized more is beyond me as this is earth-shattering on multiple fronts. And, of course, everyone knows of the recurrence of C19 with the latest outbreak occurring in Beijing. On June 23rd, Bloomberg reported that the China Beige Book stated that China was now in recession but, capping it all off, was the news on June 25th (by The Financial Times) that Sichuan Trust reported that, “it would struggle to make interest and principal payments on at least RMB 13 billion of “trust of trust” financial vehicles”…these are the first evident ripples in the RMB 3 trillion sector and I did report in a previous Global Gab that the entire financial system in China was teetering. Very sad.

Ernst & Young, better known as E & Y, apparently went for a trifecta…earlier in the year, they got hit big time for aiding money laundering in the UK by facilitating transfers of gold to a Dubai refinery…..and they got deservedly banged but good for their questionable role (and billing) at NMC Health.

But then came the pièce de resistance …..they apparently audited and approved the results of Wirecard, including E1.9 billion in cash that isn’t there and never existed. Oh, I am sure that they will get their collective wrists slapped but what happens to the investor, large and small, who bought shares in Wirecard based upon their audited assurances, only to lose it all? Exceedingly sad.

Demanding From The Weak

The USA is, to put it politely, in turmoil – dissatisfaction with the status quo ie. embedded racism finally turned to rage with the death of George Floyd by a police officer in Minneapolis. Demands for change – change in laws, change in policing, change in flags, change in statues, change in perception – were long overdue and have ultimately been perceived to be long overdue. Too bad that so many, black and white, died over all these years without seeing the results of their efforts and their sacrifices. Too bad that the need for change still exists.

And then you have the leadership vacuum by Donald, a man elected to lead the country but who instead chooses to pander only to his own followers. Surrounding himself only with slavish adorers, treating any criticism (no matter how well-founded and no matter how well couched) as disloyalty, he has abandoned his responsibility to preside. Making apologies for white power mongerers in Charlottesburg to retweeting white power tripe, the man is an embarrassment.

Leaving aside the festering mess of racial turmoil which he has greatly exacerbated due to his inane, importune, and insufferable comments, he has made the country a focus of further derision throughout most of the world as a result of his response (sic) to the Covid Pandemic. Not content with touting specious treatments (including internal ingestion of bleach) that were bereft of any medical basis, he insisted that face masks were unnecessary and doubled down on that by demanding that states reopen immediately (demanding this from the same governors whom he called, “weak”, on June 1st).

Those that subsequently opened wide have citizens who are paying big time for this stupid lack of patience; the virus is now running rampant to the point that countries preparing to reopen their borders are, at the time of this writing, intending to bar travellers from the USA.

Worse, By Any Metric

His Vice-President, after eschewing masks and telling the public that they were unnecessary, has now quietly agreed that masks can help and equally quietly postponed several campaign stops in Florida and Texas, two of the states most badly affected by this inopportune early reopening. I guess that he and his boss don’t feel compelled to go there and see first-hand, up close and personal, the damages that they have wrought due to their puerile assurances (based on pinhead peabrain fake science).

Someone might have the temerity to say that they were responsible for a situation where the USA is now, by any metric, handling the situation worse than Italy and that, unfortunately, is not fake news…..sad, very sad, YUGELY sad.