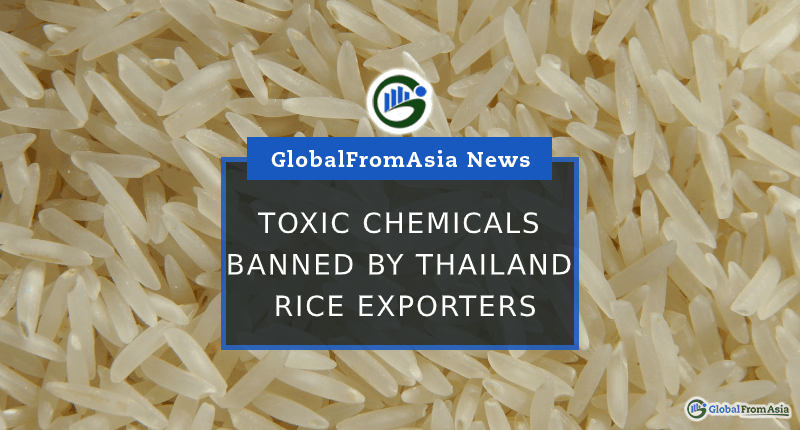 Thailand rice exporters have banned several toxic chemicals used for growing rice. A total of three chemicals have been banned.

The ban is set to take effect this coming December.

Charoen Laothamatas is the president of the Thai Rice Exporters Association. Speaking for the group, he said that they support the government’s initiative to ban three chemicals. These chemicals are chlorpyrifos, glyphosate, and paraquat.

Laothamatas has asked for farmers to cooperate as well. He asks that they reduce the amount of chemicals they use when they farm.

The decision was made due to the current food safety standards being upheld by rice importers. The importing countries are concerned with the safety of their buyers.

The honorary president of the Thai Rice Exporters Association has shed light on this recent change. He shares that many countries are moving towards “safer” farm products. He indicates America and Japan as key examples of countries that have created laws around this safety.

For rice, most of these countries require little to no chemical residue. In Japan, their acceptable level is less than 0.1. In the recent past, a Japan surveyor visited Thailand. They saw that the rice did not meet the safety requirements.

With stricter safety standards, rice with these chemicals have a low chance of being bought and imported. The bottomline is the revenue of the exporters.

This “safe food” movement seems to have taken Thailand by surprise. The Thai government has requested for countries to understand where their farmers are coming for. However, they are unsure if the other countries will renege on their new safety standards.

This has forced Thailand to shift their practices. Last month, the ban on the three herbicides in question were voted on. This vote changed their classification. From a Type 3 toxic substance, it is now Type 4.

People understand why this is happening. However, it did not translate to overall support. The farmers of Thailand petitioned to suspend the ban. They are asking for more time to study the situation.

For one, they want to study and gather evidence on the substances. They would also like to discover alternative methods to do away with the weeds in their farms. The biggest fear they have is that the alternatives will end up costing way more than what they make.

In an interesting move, the farmers have also called into question the validity of the data that led to the ban. They say that academic figures and activists have been providing wrong information to the decision makers.

Despite these protests, the ban was thrown out in favor of banning the substances.