No, please don’t think that I’m in any way doing an infringement on Nike (FYI, they use Swoosh)…this is WHOOSH ie. the sound the toilet makes when you’re flushing. Ever since Mike prevailed upon me to write the ‘occasional’ column, it has morphed into a regular (almost) weekly dealio – I’m not complaining but just saying that, in the beginning, it was fairly simple (can it be that the world was simpler then?); now that The Donald tweets his twits (or twits his tweets, if you prefer) from anywhere including the bathroom, it seems that, like a defective septic tank system, he flushes and, swoosh, everyone is covered in it up to their eyeballs.

And so it goes – first of all, a shout-out to Lucienne , who did a particularly terrific job of setting up #24 – you rock, girl! And also a scoop to report, thanks to a reader …previously I stated in GG#24 that the SCMP reported that the police had said that the Hong Kong demonstrators numbered (only) 128,000 when the truth was about 1,700,000. Just as an aside, I have noticed that, since Jack Ma’s acquisition of the paper, there have been the occasional soft ‘lapses’ in favour of the Mainland powers-that-be and this is a valid illustration – there were indeed 128,000 demonstrators but this was ONLY in Victoria Park – and I would also like to mention that this filled the park to capacity. So you could say that this column has actually corrected SCMP – not bad from 12,500 miles away and many thanks to the reader who pointed it out. I am anal about being absolutely accurate.

Run down of some highlights of the past weeks

Let me run down some highlights of the past 1 ½ weeks or so:

A meltdown – to emanate from China?

On August 19th/19, McKinsey issued a report stating that it “sees ominous signs of another Asian debt crisis” (I’ve said the same thing repeatedly in different ways). The 1997 meltdown stopped at China – in broad strokes, China stopped it from spreading. Now it seems that it will emanate from China and that it will be like a tsunami, obliterating everything in its path. HNA on August 23rd/19 repaid a US $300 million bond, but it needed about a 50% infusion from the Hainan Provincial Government to do it – at the same time, it did NOT pay out on an RMB-denominated bond.

On August 26th/19, Bloomberg reported that the Qinghai Provincial Investment did not complete a transfer for the payment of an offshore coupon – in other words, it was late. (It paid a few days later.) This mirrored the sequence of events for their payment on the same coupon in February. Unfortunately , there are more and more examples.

The Financial Times on August 26th opined that “China’s clampdown on asset management (read “shadow banking”) lending is causing corporate defaults” – like, “DUH”! They just woke up to this or does the reporter get paid by the word and hope that his editor didn’t notice that this is ancient news. Bloomberg reported on the 25th that, in addition to Chinese firms located in China proper having o/s debts of an estimated US$2 trillion, their foreign subsidiaries owe US$ 650 billion more, most of which is denominated in US currency and a significant portion of which is coming due in the relatively near term.

It doesn’t take a PhD in economics to determine that a weaker (ie. lower) yuan is going to make it that much harder to make payment in full/on time. Something that I will reiterate – a huge amount of this debt was assumed when the RMB was falling from 6.85:1 to 6.35:1. All these mavens were busy congratulating themselves on their acumen and laughing at the gweilos who were taking it up the tochis. They were so sure of themselves, so arrogant, that they never even bothered to investigate how they could hedge their exposure. Now its gone the other way and these SOE companies, who publicly lay claim to no more than 10% yearly profits (and I’m being very generous in accepting their figures without further comment), will have to pay back bonds on which they are losing more than that in FX. You do the math. WHOOSH!

How’s it going in HK?

As part of the HK unrest, The Beijing Government has insisted that Cathay Pacific, on pain of being denied use of China airspace, toe the official line and also fire any employees who speak out against the HK Government in any way. In addition, they are insisting that global company CEO’s toe the Party line (re: Bloomberg, August 22nd) and, on August 23rd (SCMP), urged foreign media to “help right public opinion on Hong Kong” (and, it follows, on anything and everything else). 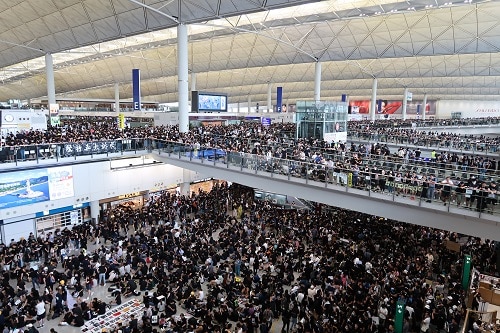 In base terms, you can’t have a free-wheeling entrepreneurial-based society when it is stifled by a bunch of hacks who never got their hands dirty in their lives and don’t understand the mindset of the people there and don’t speak the local language. Then you get what they are getting – overworked plumbing! WHOOSH! WHOOSH!

Pulling rabbits out of a hat

It is most interesting how they keep pulling rabbits out of a presumably empty hat – to get the economy moving faster, the government promoted (and still promotes) the sale of housing. That was followed by stock, then cars, and then by (internal) travel, and now by consumer ‘spending’. To get the people to spend their phenomenally high level of savings, they contrived high profits on real estate, and then sucked those into the stock market. Then they issued bonds. Now that all those venues are running on fumes, they’ve got a new one – according to Forbes yesterday, Alibaba, TenCent, and five other companies will be allowed first rights on a Chinese-Government sponsored cryptocurrency. They are going to create billions and billions of dollars worth (sic). Three card monte, anyone? WHOOSH!

Interestingly, even the Government is apparently running out of positive fodder – Xinhua (the Official News Service of the People’s Republic of China) gave out a blurb on August 26th showing that, in 1996, there were only 443,000 private companies in China and that now, in 2017, there were 14.369 million (I just love how almost every official government figure has a lucky 3/6/9 or, usually, 8) and they extolled how this private companies are now about 80% of the total number of companies. What they did not provide was anything relating to assets, share of GDP, numbers of people employed etc.. Another play with figures was the New York Times reporting on August 16th of Alibaba’s quarter ending June 30th ie. “strong despite slowing economic growth (in China)”. They left out things like comparisons for the number of clients and the average ring per sale and the fact that Alibaba has expanded its coverage in China dramatically – and they only mentioned en passant Alibaba’s new venues which contributed significantly to the figures. Nothing like toeing the Party line – so much for, “All the news that’s fit to print”. WHOOSH!

Finally, according to Nikkei on August 19th, Beijing is working to turn Shenzhen into the new Hong Kong. Yet, on the same day, The Global Times (another State-owned media venue) reported that Beijing intends to build Shenzhen into “a socialist demonstration area”. They can certainly maintain control in Shenzhen and they have given ample evidence that they have and will continue to do so. At the same time, they want to have what Hong Kong has – the wealth, the drive – but they exude a total lack of understanding as to what makes Hong Kong tick. 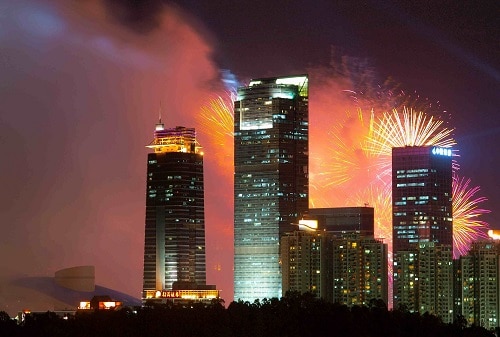 In base terms, you can’t have a free-wheeling entrepreneurial-based society when it is stifled by a bunch of hacks who never got their hands dirty in their lives and don’t understand the mindset of the people there and don’t speak the local language. Then you get what they are getting – overworked plumbing! WHOOSH! WHOOSH!

And, speaking of plumbing, I would be remiss should I conclude this issue without mentioning The Donald once more. In China’s and Xi Jinping’s defense, ask yourself who in hell would sign a deal with a grifting buffoon when he has ripped up every deal the USA had and stuck it to every single one of the USA’s allies?

He wanted to buy Greenland and was incensed when the Danes refused – apparently the fact that they dared to refuse was considered “rude” (yes, Donald knows the word, just not as it applies to him) and he then cancelled his previously scheduled trip to the country. Too bad – the smoked herring is delicious! Not to be outdone (because such a thing is anathema to his ego), he has announced that he is, “the chosen one”, and then added in “to take on China”.

On August 26th, he actually had the temerity to demand that American firms leave China – and he expects that the Chinese are going to want to make a deal with him? Would you if you were them? And, on August 26th, The Trumpster declared that, “they (China) want to make a deal very badly”. My take – they will delay and dissemble and bob and weave and they will let Donald issue his pusillanimous prevarications and then undercut him with quiet actions until even his most rabid-dog supporters will be cutting him loose (as the truckers have already). It’s just a little over a year to the election – WHOOSH WHOOISH WHOOSH!

Thanks for reading – comments/suggestions? Let me know.

Have a great weekend.