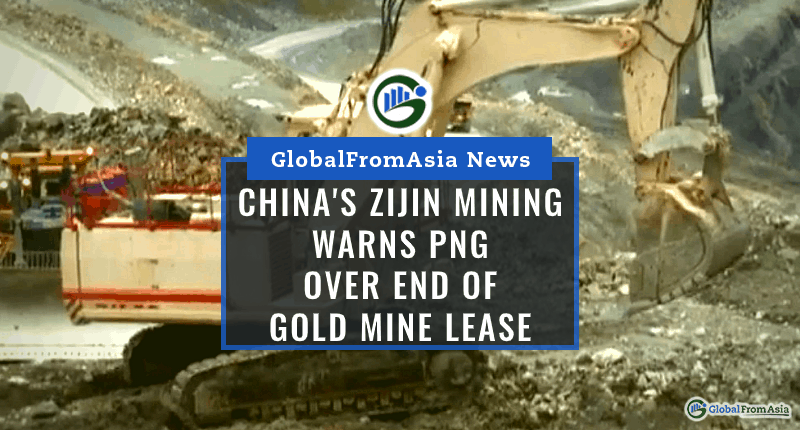 China’s Zijin Mining issues a warning to Papua New Guinea (PNG) if the lease for a co-owned gold mine is not renewed.

Relations between China and PNG are currently rocky. Their continued relationship currently depends on a gold mine. This gold mine is owned by both China’s Zijin Mining and PNG’s Barrick Gold Corp.

The message from China is clear: if the lease is not renewed, it could damage their bilateral relations moving forward.

Last Friday, PNG stated that they will not be renewing the 20-year mining lease at the Porgera gold mine. They explained that this was due to environmental damages and social unrest. These reasons come despite the fact that gold prices are higher than in the last seven years.

Barrick Niugini Limited (BNL) is the local business that both miners have an almost 50% stake at. Last Saturday, they suspended operations. When asked why, they said it was because the government had not notified them whether the lease was being renewed.

The government had not even given any details of any transition plans.

When this happened, Zijin said that the government should renew the lease, or at least conduct negotiations for it, as a sign of good faith.

The chairman of Zijin’s board expressed in a letter that they would like to continue contributing to various relationships it has with PNG. These include economic, trade, cultural, and even intergovernmental relationships.

The letter also stated that if PNG were to not protect Zijin’s investments, it may cause their bilateral relations to erode.

Reuters reached out to various government offices in both countries. They reached out to China’s Ministry of Foreign Affairs and their embassy in Port Moresby. They also tried to reach out to PNG’s Prime Minister. None of these parties have committed any comments.

PNG’s budget figures reveal just how important China is to them at the moment. The figures show China’s steady rise in influence and spending. Following the budget reports, China is currently their biggest creditor.

Despite that, the renewing of the lease has not yet moved. One reason for that is the effect of the mine on the people who live around it.

The local residents are opposing the mine. They are saying that the mine has polluted the waters around their homes. Apart from the water, they also say that it has created more environmental and social problems.

It is currently unknown whether the concerns of the local residents are the reason why the lease has not been renewed.

PNG Prime Minister James Marape took to social media to offer his own stand and actions. He said that if the mine closed during the transition period, the government would be taking control of it.

Both countries have said that they would pursue legal actions in order to protect their interests, with the hopes of recovering damages.