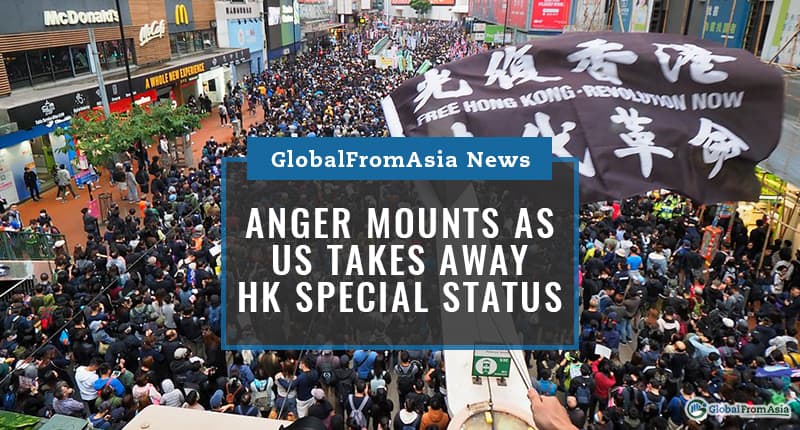 Anger among Hong Kong (HK) officials is mounting as the United States (US) is taking away the special status of the country.

Last November 2019, the US government passed the Hong Kong Human Rights and Democracy Act. Under this act, sanctions can be placed on individuals who are threatening to undermine the autonomous nature of HK.

The ultimate goal of the act is to protect the human rights of the people in Hong Kong.

Recently, China enacted national security laws in Hong Kong. For US President Donald Trump, it is a blatant violation of the “one country, two systems” principle. Thus, the US will be removing HK’s special status.

For the US and President Trump, taking away HK’s special status is meant to be punishment for China. President Trump spoke and said that officials would face sanctions. He also added that economic privileges would be taken away.

After the talk, several senior officials of Hong Kong came forward. They are criticizing US President Donald Trump’s recent actions.

Finally, Lee stated that he believes what they are doing – and the laws they are enacting – are right. Thus, the US will not be able to threaten the HK government.

HK’s justice minister – Theresa Cheng – also weighed in. She said that Trump’s basis for his actions were completely “false and wrong”. She also said that the new laws were enacted in a legal way and were necessary.

While the US has revealed its next moves, they have not revealed when they will be taking place. Business owners, residents, and officials from HK will be left wondering how far the administration will go.

President Trump and the White House seem to be taking the events harshly. They have stated that it was a “tragedy”.

However, experts suggest that a lack of specific details to the US’ next move could mean that it only acts as a symbolic gesture.

This could be a significantly huge blow to Hong Kong.

When Britain returned Hong Kong to China, they agreed upon the “one country, two systems” framework. Certain freedoms and autonomy was to be given to HK for at least 50 years.

These liberties include freedom of speech, a free market economy, legislative autonomy, and more.

This system allowed for the US and many other countries to deal with HK as separate from China. Due to this arrangement, HK was able to blossom into a formidable economic power. It even got on the level of London and New York.

Without the agreements in place, would countries continue to deal with HK? Could they still operate at the same level they were when they had their own system?

The future of HK is uncertain, but people in and around the situation are not hopeful for it. Time will tell if the decision of the US to take away the special status will be heeded or ignored.