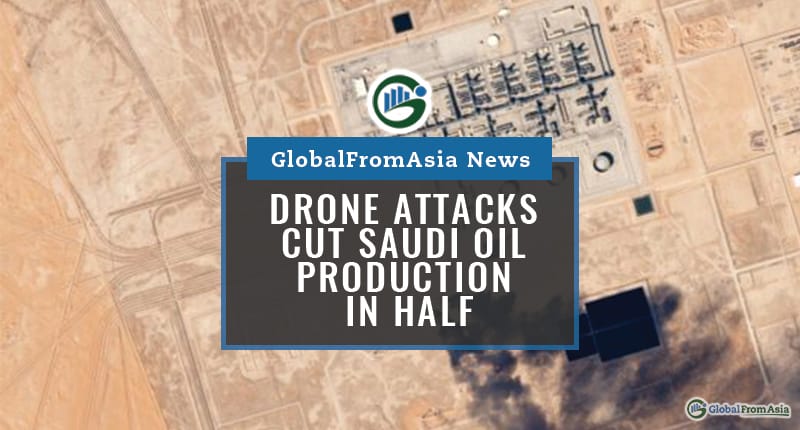 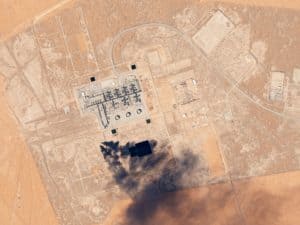 (Aerial view of Khurais oilfield, which was attacked by drones)

Saudi Arabia’s oil production was cut in half after several drones attacked their facilities. The drone attacks were claimed by Houthi rebels from Yemen.

Last Saturday, the Houthi rebels claim to have orchestrated several drones attacks to Saudi Arabia. The drones attacked Saudi Aramco, the oil company owned by the state. It is also known as the largest oil developer in the whole world.

CEO of Suadi Aramco, Amin Nasser, stated that nobody was hurt from the drone attacks. However, the thing that was hurt was the oil production per day of the company.

Saudi Aramco produces close to 10 million barrels of oil a day. This attack halts more than half of oil. If this is put into context, the amount of oil that wasn’t produced amounts to at least 5% of all oil produced in the world on that very day.

In addition, the Saudi Energy Minister said that half of all ethane and natural gas liquid production was also stopped.

In order to cater to their customer’s needs, Saudi Arabia will compensate them with what they have in their reserves.

While the drone attacks centered on Saudi, the consequences are felt the world over.

Lipow states that of all the oil barrels produced by the Saudi nation, roughly 40% goes to different countries around Asia. China and Japan lay claim to more than a million, while the United States also brings about 600,000 barrels.

With what has happened, Lipow says that the price of barrel could very well double; from $5 to $10 per barrel.

Yemen’s Houthi rebels were very vocal in laying claim to the drone attacks. People caught wind of the attack after thick plumes of smoke were being videoed and put up online. In these clips, people could hear machine gun fire, as security personnel tried to bring down the drones.

This is not the first drones that have been sent to attack Saudi Arabia from the Houthis. However, this seems to be the first drone attack that has done so much damage to this and many other countries.

A Houthi military spokesman said that this recent drone strike was successful due to information that they had gotten from inside sources. He also said that that the attacks would continue to worsen if the Saudi nation were to continue their war.

This war he is referring to is the efforts of Saudi Arabia to reinstate the Yemeni government. These efforts have been going on since 2015.

This Houthi group is allegedly being supported by Iran. This brings to the fore the escalating US-Iran crisis. Due to this, there is surmounting fear that war may break out between these two countries.

United States President Donald Trump said the troops are ready and waiting. The only thing they need to confirm is who really did the attacks. While the Houthis said that they did the attacks, the US government is accusing Tehran for masterminding the drone attacks.

US Secretary Mike Pompeo doubled down, stating that there is no evidence that Yemen and the Houthi’s put forth the attack.

Tehran on the other hand responded to these allegations and said that they had nothing to do with these attacks.

One Comment on “Drone Attacks Cut Saudi Oil Production in Half”