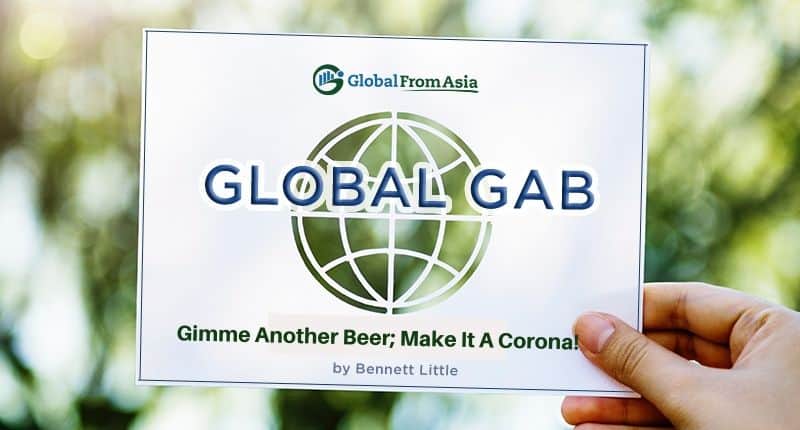 This is NOT going to be my ‘regular’ column about an irregular world. Instead, I beg your indulgence in that I want to solely address what has become the major news item worldwide (no, Donald, sorry but it’s not the immensity of your intellect (sic) or the size of your, er, hands ?) – but the ‘Wuhan coronavirus’.

It’s bad enough on its own but even more so because nothing is yet definitively known about it – not what causes it, not what cures it. Even the declaration that Wuhan is the epicentre was only (somewhat) established by empirical evidence – The Lancet reported the other day that even this is not definitive as it appears that this virus had manifested itself over a month before it was officially reported and that many of those people with early cases had no apparent relationship to Wuhan (ie. it might have started elsewhere and been carried to Wuhan). Indeed, it has now been reported officially that the virus can be contracted from carriers who themselves do not appear to be sick.

So what has happened – total illogic behaviour exacerbated by (to quote Bloomberg on January 30th/20), “conspiracy theorists, trolls, and cynics (as they) try to use the panic to boost traffic to their own accounts”. Toxic nonsense has just reached a new low – as reported in the National Post on January 30th/20 – a major search on Google last week in regards to the coronavirus was NOT only the number of deaths, was not only how you can contract it, was not even only on how you can prevent it – it was on checking the relationship of coronavirus to Corona beer! Frankly, I am more afraid of coming into contact with people who would think of something like that than I am of contact with someone with the virus.

What do we know? Well, we know that the Head of the WHO showed up in Wuhan, announced that he was satisfied with all the steps that the Government of China was taking, stated that foreign countries need not bring their citizens back, and then immediately left to go back to the rock from under which he initially crawled. Oh, yes – and a few days later he then declared it to be an epidemic, while he was of course safely back home; now wasn’t he just so inspirational with his devotion and courage?

The Book of Blind Idiocy

That said, the Chinese Government in Beijing is, from what I can see and hear, doing everything in its massive power to contain this virus – even the most cynical have to recognize that they have effectively stopped the entire country. Factories are closed, schools are closed, travel is restricted in many cases and self-imposed where it’s not – financially, this is a deep pit with no bottom in sight. But you still have the normal cover your ass-as-usual mentality evident and pervasive in the low to mid-level government cadres despite Xi Jinping going on TV and stating that this is not acceptable…..frankly, this is the exact same mindset that caused the SARS fiasco and nothing has changed….

When the symptoms were originally diagnosed as something new, the governments of Wuhan and then the Hubei Regional Government tried to suppress it (not the virus, just the diagnosis). Yes, if you ignore it then it will disappear – it is so stated on Page 1 in The Book of Blind Idiocy. The result has been that, at the very least, maybe 25 million people passed through Wuhan in the course of normal business in the month before the news of the virus became widely dispersed, thereby ensuring that the virus will become almost as widely dispersed as the news of it will be.

What’s up with Wuhan?

Wuhan is a major transportation hub (Wuhan Airport handles 25 million passengers/year and just opened a new terminal capable of 35 million, plus it is one of 4 major railway hubs in a country of 1.4 billion people) and this, coupled with the accelerated levels of travel precipitated by Chinese New Year travel…….

Once the Central Chinese Government was made aware of the problem, it made the decision in less than a week to quarantine the city and its surrounding area. This is a population equivalent to roughly that of Canada in entirety ie. 35 million people. But, despite such herculean efforts, it is doomed to failure thanks to the deliberate stupidity of the Wuhan government officialdom.

One does not need a degree in math to imagine the results of 25 million or more people in transit being exposed to an unknown pathogen (and that doesn’t even begin to consider another 35 million people living within the quarantined area). So the Central Government built 2 new hospitals in about a week, except that those hospitals as well as all existing hospitals within the containment zone are all short of basic materials eg: masks, gowns, IV’s etc.. What use is a hospital if there are no masks, not even counting the fact that most of the masks that were available are unsuited for this task (ie. acceptable for pollution, not for germs)?

So people, who are naturally worried, lose even more faith, especially when they realize that most of this mess could have conceivably been contained if that sycophant known as the Mayor of Wuhan had actually honoured his obligations instead of trying to deflect them.

If this contagion is actually found to have originated in the Huangan Market as is still surmised, and the contagion is found to be as a result of the conditions in the market, let it be known clear and wide that those unsanitary conditions were complained about publicly (something that is almost never done in China as being a ‘negativist’ can have a negative effect on one’s continued well-being) 18 months ago. And the complaints were completely ignored.

After all, the Mayor gains much face from a new airport terminal but a new toilet/sewer is shit.

Oil is not needed because no one is driving anywhere and factories are closed. Copper and related materials are falling as demand as fallen off a cliff as construction effectively is stopped cold. The Chinese Government has told companies publicly that it will issue documents citing force majeure in the case of contracts that cannot be met. And this coming Monday, February 3rd, the Chinese stock market reopens after the New Year break – expect stocks to drastically fall, especially those of casinos, airlines, restaurant chains and related areas.

Okay, that was the preamble – the fact is, people, that this is just another virus. The flu that happens every year is a virus and it kills thousands of people worldwide every year and no one even bats an eyelash. According to WHO, the mortality rate of those infected by SARS was 7.2% – at current reported levels, the mortality rate of this virus is less than half of that. So get a grip, people – there is no reason to demand that someone who looks ‘Chinese’ leave a restaurant as happened in Japan and South Korea (those bastions of xenophobia at the best of times).

Fear of the Unknown

Let’s stop unprincipled people who are using this fear of the unknown as a rationale to perpetrate their hate and exploit the situation – and, yes, I am also referring to the anarchists in Hong Kong who, not content that demonstrations are over with for the foreseeable future, have now shown their true colours and are now causing havoc to protest certain Hong Kong Government proposed quarantine measures.

For sure Carrie Lam’s misapplied heavy handedness does her no more credit than her previous showing, but using fear, prejudice, and violence to stay relevant (in the anarchists’ own minds anyway) is both immoral and unacceptable. For a change, we are all in this together – sure, it started in China somewhere, but the virus doesn’t restrict itself to Chinese people any more than it does to people who drink Corona beer.

It doesn’t stop at borders and no one even knows for sure if it is only passed by people or if there are other means of transmission. One thing is certain – it will mutate because all viruses mutate. No one needs Li Keqiang (Premier of China) to meaninglessly exhort for a speedy conclusion for the development of a vaccine (Xinhua, January 30th/20). Such puerile empty posturing only facilitates more distrust and dismay – what does he think that the researchers are doing?

Maybe he would be better advised to give a speech extolling the necessity for responsible good government and then conclude by taking the Mayor of Wuhan, his assistant, and the Regional Governor and his group of sycophants and escorting them all to the specially built virus hospital and leaving them there without masks until the last patient goes home.

Use N95 masks if you feel that you are in an area that requires being masked and wash your hands thoroughly and continuously. Take a look at the clip offered on the SCMP site wherein Dr. Joyce Lai was interviewed – she is clear, concise, and easy for everyone to understand (except Coronavirus beer drinkers).

And seeing as the New Year’s holiday is mandated to last at least another 10 days, why don’t you take the time to read Mike Michelini’s new book, E-Commerce Gladiator….drinking Corona beer (or anything else) is optional. ?

Remember, a cure for this virus will be found but there is no possible cure for total stupidity.

One Comment on “Gimme Another Beer; Make It A Corona!”