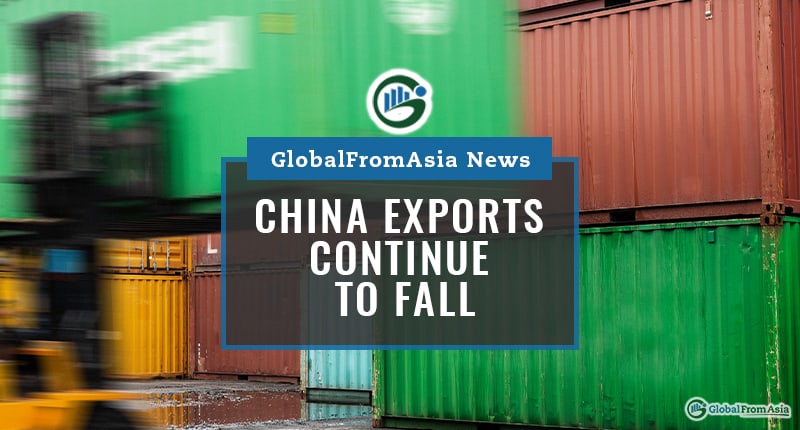 The exports of China have continued to fall this month. This marks the fourth straight month where China’s exports have decreased.

Chinese exports to the United States showed another decline this month. The exports have declined by 1.1%. People may see this figure and scoff at it. However, when people realize that the exports have been declining for the past few months, it may turn a few heads.

Last month, it decreased 0.9%. Prior to this month, Bloomberg forecasted that the decrease would be at 0.8% only.

Exports to the United States specifically have dipped by more than 20%. This is the worst dip seen since February of this year. This can be seen as the result of the on-going trade wars between the two countries.

Due to this continual decrease, it is interesting to see the trade surplus between the two countries. Last month, the figure was at $26.42 billion. This month, it is at $24.61 billion. The trade surplus is a main point of contention for the United States.

China’s market may continue to be affected. This is because a new round of tariffs or taxes is set to be imposed by the 15th of December. This time, more than $150 billion worth of export products will be affected.

As we speak, China’s government is looking for ways to circumvent these tariffs. They hope to find a way to continue with their exports.

However, economists say that if they do find a way, it may be too late. The people they were exporting to, in the United States, might have already found alternative sources for their products.

An End to the Madness?

The trade war between China and the United States has been going on for months. Each month, both sides say that negotiations are on-going. The figures speak differently though.

The latest from the grapevine says that there is a deal in place. It is said that this deal is aimed at defusing the tensions in their trade disputes. The details have not been finalized though, and are still a big point of contention for both countries.

For China, any deal made must scrap all tariffs made so far.

United States President Donald Trump sounds overly optimistic about the negotiations. He also says though that any deal might have to wait after the upcoming elections in 2020.

Furthermore, tensions have continued to rise with the passing of two bills from the United States.

The first is the Hong Kong Human Rights and Democracy Act. This bill looks to remove the special status of Hong Kong if the United States sees its freedom and democracy being affected.

Next is the Uighur Act. This act calls for the Chinese government to dismantle the “re-education camps”. These camps are where the abducted Uighurs are placed, punished, and brainwashed.

Both these bills have drawn the ire of the Chinese government.