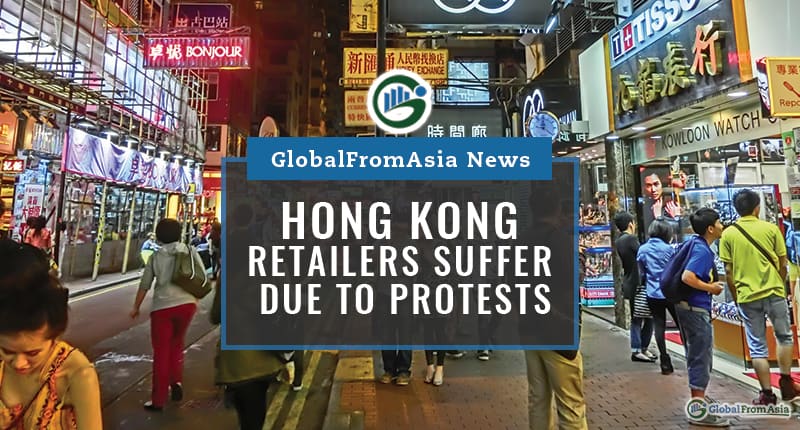 (Hong Kong’s Causeway Bay, the biggest shopping district, suffers the most from protests)

Hong Kong retailers are suffering due to the ongoing protests. A great number of these retailing shops could be forced to close down by the end of the month. This would displace thousands of people, leaving them jobless.

The overall feeling in Hong Kong is quite gloomy. The protests that have been going on for months now have driven away any sort of shopping that could take place in several retail shops.

As many as a third of retailers are starting to send their full-time employees on unpaid leaves. This comes after they had to let go of their part-time employees as well.

This situation could not have come at a worse time for the retailers. The start of next month is supposed to be the “golden week”, a week-long holiday that is generally seen as a very busy and lucrative period.

Apart from the effect of the protests locally, it has also affected the potential tourism that the golden week could draw. In the previous year, Hong Kong had more than a million tourists visit and shop around.

Last August, the tourism already felt the impact of the protests. The tourism rate declined almost 50%. The last time Hong Kong felt this decrease in tourism was in 2003, when the Sars virus had an outbreak.

With the way things are going though, retailers may miss this period altogether. Retail sales are already down 13%. In cosmetics, the sales have dropped by 40%.

In terms of impact, Causeway Bay – the center of Hong Kong’s retail shopping – has felt it the hardest. This is mainly because of the rally point of the protestors at Victoria Park which is nearby.

Apart from that, certain protestors are carrying out demonstrations in shopping districts that don’t share their ideals. The protestors have set up an online campaign called “Bye Buy Day HK”. This campaign asks for citizens to stop spending on the weekends.

In order to survive, the Hong Kong Retail Management Association had a proposal. They proposed that the people leasing the lands to retailers cut rent in half so that the businessowners could survive.

While the request seems logical, the landowners may not agree to it says Alexa Chow Yee-ping, the managing director of AMAC Human Resources Consultants.

It isn’t only retailers that are experiencing pains due to the protests. Most hotels are also hurting from the protests.

The largest developers in Hong Kong, Sun Hung Kai, have seen a 50% decline in the occupancy of their hotels.

Raymond Kwow, the chairman and managing director of Sun Hung Kai, said that their hotel’s occupancy really took a hit when the Western countries gave out warnings regarding travelling to Hong Kong.

State of the Nation

The protests continue to rage on the streets of Hong Kong, even after political leader Carrie Lam withdrew the extradition bill. While this was one of the main demands of the protestors, continue on, fighting for their other demands.

Tensions continue to rise in the streets of Hong Kong. In fact, the Hong Kong police association has warned protesters that if they throw petrol bombs, then the police may use live ammunition at them.

The chair of the Junio Police Officers’ Association said that he saw the protesters as rioters instead. He also said that these rioters attacked innocent people.

In an effort to solve the protests and quell tensions throughout the city, Lam is opening a public dialogue next week. She said that she hoped this would be a platform to discuss these problems and hopefully solve them.

4 Comments on “Hong Kong Retailers Suffer Due to Protests”